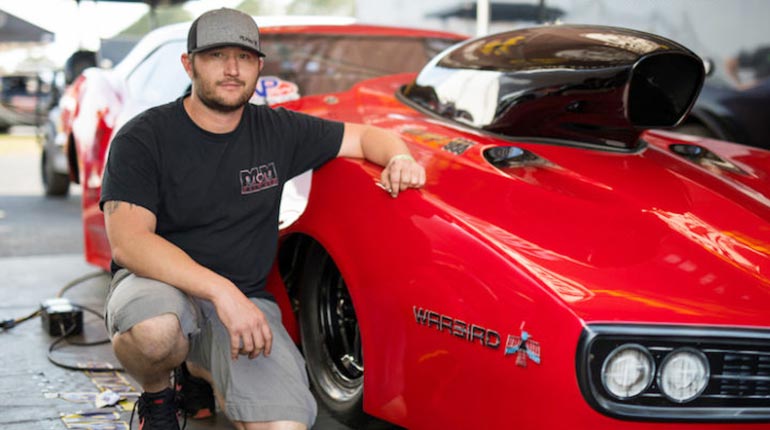 Kye “Shocker” Kelley’s career as a racer took off after he appeared in the Discovery’s reality show Street Outlaws: New Orleans. After beating off OKC 405 guys, he is now the man to beat.

Kye Kelly was born on May 19, 1987. He grew up in Magnolia, Mississippi along with his sister. He hasn’t shared much about his parents but he has always been overwhelmed towards his mother, Tammy Johnson Kelley‘s support. His mother has been the one for his “do-gooder” mentality.

He attended South Pike Senior High School in Magnolia, Mississippi. With a partial scholarship to junior college, he graduated high school. However, due to financial constraints, he couldn’t continue his education. Shortly after graduating high school, he began working as superintendent in the oil refinery industry.

Everything to know about Street Outlaws’ racer Ryan Martin!

Kye first got into racing when he was just 14 years old. After getting a driving license, he started riding dirt bikes and later moved to faster and faster cars. He used to race his four-wheeler with other guy’s car in his hometown.

Kye Kelley was just a hometown hero until he got called out from OKC Storage Outlaws star Justin “Big Chief” Shearer. When Big Chief was looking for the best racer in a popular New Orleans street racing location, Da’ Pad, Kye Kelley was the name which he got. From that point, gradually the hometown-based racing career of Kye reached up to international level.

For the race opposed to OKC Street Outlaws crew which took place in mid 2014, Kye got slated to race against Daddy Dave. Describing the moment he shared, “I looked up to him a lot, and to race him was priceless.” However, he lost the race, but with the tight finish, he found himself getting calls from some fastest cars in the country.

Daddy Dave New Worth 2018. Know About His Car

Later in early 2015, he got an invitation by 405 guys to a 16-car Cash Days race in Texas where he got a chance to vindicate himself. He beat down Daddy Dave and other big deal drivers like Big Chief, Doc, and Bobby “Hollywood” Treadwell.

He held the three-car lead over Chief and bagged $39k of Chief’s money. After beating down one of the top racers, he got a name in the racing community, i.e. Big Chief’s number one nemesis.

Further, he has also beat down Shawn “Murder Nova” Ellington. The race took place after the Muder Nova won the race for $2,500 with Kye’s friend Scott Taylor.

After successfully beating the OKC Street Outlaw crew’s fastest cars, he is now the leader of New Orleans racers. With some remarkable wins and tight finishes, he has become the man to beat. And to maintain that he got to work endlessly in his Camaro called The Shocker to keep it in top shape and watch over for every challenge.

He is also the owner of the Down Town performance shop in his hometown of McComb, MS. The shop specializes in Pro Mods, streetcars, and much more. With his up-and-coming career in racing and as the owner of a performance shop, he must have accumulated impressive net worth. As of 2018, the exact figure of his net worth has not been revealed officially.

Kye Kelley is in an open relationship with renowned engine builder Pat Musi’s daughter, Lizzy Musi. Kye and his girlfriend shares same passion. Yes, you got it right! Lizzy is also a drag racer.

The pair sparked the rumor of them dating after Lizzy posted a snap with Kye in mid-2017. Besides, Kye also updated his Facebook relationship status on April 24, 2017. Since then, the two has been going strong. Both of them often shares snap together in social media.

Prior to the relationship with the beautiful racer, Kye was previously married to his longtime girlfriend, Alisa Mote. After dating for years, the two got engaged in 2014 and later tied the knot in August 2015.

The two also shares a daughter, Kenadeigh Alexa Kelley. Despite the years of togetherness, the duo decided to part ways. The two got officially divorced in early 2017. Kye is also a father of a kid from his previous relationship.