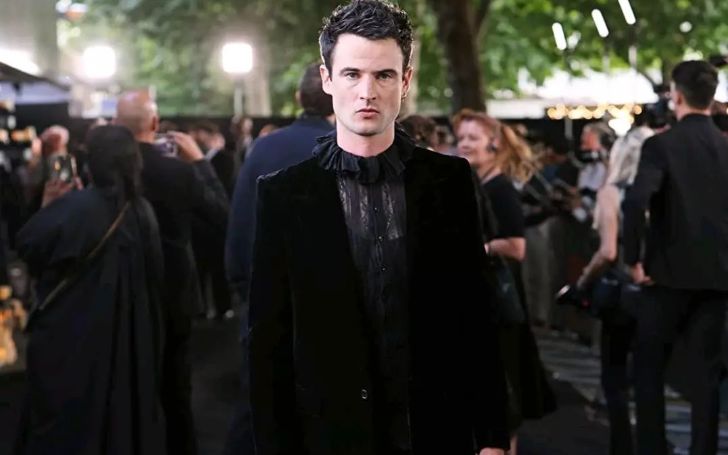 Tom Sturridge is a British actor. This stunning actor is famous for his role in the Netflix series The Sandman. Moreover, he has performed in multiple movies, TV shows, and theatres, such as Like Minds, Irna Vep, etc.

Follow us for detailed bio and facts about celebrities, and stay tuned. Now, let’s dive right into Tom Sturridge’s life and learn more about his early life, education, relationship, career, and more.

Tom Sturridge was born Thomas Sidney Jerome Sturridge on December 21st, 1985, in Lambeth, London. He was the child of the famous director Charles Sturridge and stunning actress Phoebe Nicholls. Likewise, Tom has two siblings, among which his sister, Matilda Sturridge, is also an actress.

Sturridge completed schooling at The Harrodian School, an independent School in Southwest London. In addition to that, he also attended Winchester College, a boys-only College in Winchester, for almost two years.

Similarly, growing up around actors and directors in his family, Tom showed extreme interest in acting. He was very passionate about working from a young age. In addition, he portrayed a child actor in the television adaptation of Gulliver’s travels.

Tom is a brilliant and handsome actor having a great fanbase. Moreover, he is famous among youngsters, and girls are crazy about him. Sturridge is about 5’11” tall and weighs around 70 kgs. He has a lean physique.

This stunning actor has a pale complexion and is exceptionally charming. Fans are fascinated by his lovely personality and pretty face. Tom has blue eyes and brown hair that compliment his looks.

From pictures shared around the internet, we can say that Tom does not seem to have any tattoos on his body. Sturridge often wears designer brands on red carpet events.

Tom Sturridge, The Sandman star, is in a relationship. According to online sources and rumors, Tom is allegedly dating Alexa Chung. Alexa is a famous British writer, model, and fashion designer. The media spotted the couple, Tom and Alexa, at a sporting event, locking lips and being romantic.

Sturridge’s ex-fiance, Sienna Miller, was also present at the event with her boyfriend, Oli Green. Moreover, it seemed like the two exes were on a double date. However, neither Tom nor Alexa has come forward and admitted to their relationship.

In the past, Sturridge Miller engaged, and the couple was madly in love with each other and even had a daughter. Later, the couple broke up, and the reason behind it is still not unknown. However, Tom and Sienna seem to be on good terms after the breakup.

In early 2019, the public spotted Tom and Maya Hawke, and rumors sparked across the internet that the two were dating. Furthermore, the fans spotted the two at the beaches together in New York City and various other places. Nonetheless, the two never came forth and confirmed their relationship. And the rumors all but vanished after fans saw Tom with Alexa.

Tom Sturridge is not present on any social media platforms. Furthermore, he likes to keep his life private. He has no social media handles; however, his fans have created an Instagram account with more than 48k followers.

The career of Tom Sturridge

Tom Sturridge started his career as an actor at a very young age. He starred in a TV adaptation of Gulliver’s Travels alongside his mother and his father directed. Furthermore, Tom appeared in the drama films 2004‘s Vanity Fair and Being Julia.

Tom played in various movies, TV shows, and dramas. He is known for his hard work and dedication to his work. Likewise, Sturridge is famous for his acting skills and performance in his every work.

In 2005, he portrayed William Herbert in a drama show, A Waste of Shame. Later, Tom was offered the role of Nigel in the famous psychological thriller Like Minds. Likewise, from 2006 to the present, he has been in various movies and TV shows.

In August of 2022, The Sandman premiered, and Tom played the lead role. He gained a lot of fame and recognition for his work, and fans are obsessed with his acting.

The stunning actor has received various nominations throughout his career for his work. In 2009, Tom won the Most Promising Newcomer’s Award for his work in Punk Rock. In 2013, for his work in the play Orphans, he won the title Outstanding Featured Actor in a Play and the Theatre World Award.

Though Tom has not been awarded many awards, his works are a masterpiece. Furthermore, the public love and appreciate this hardworking actor. And with his recent work in the Sandman series, Sturridge could be bagging an award very soon.

What is the net worth of Tom Sturridge?

Tom has an annual salary of $1 million. On the other hand, Tom’s ex-fiance Sienna has a humongous net worth of $18 million. Therefore, we can safely assume their child will live lavish lives.

Learn about Ashley Martin Carter and her Bio, Net Worth, and More.

Despite having such a considerable fortune, the star doesn’t like to show off. As a result, Tom has currently taken a break from social media. Hence, there is no information regarding his daily life and assets.