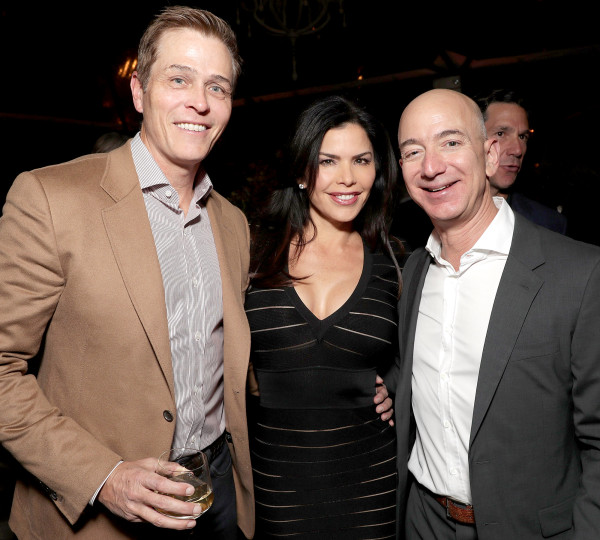 Amazon CEO Jeff Bezos and former TV anchor Lauren Sánchez are all over the internet! Reports have it that they have been dating for about four months. And both of their partners were blindsided by their romance.

After the news of Bezos’ affair with Sánchez surfaced, the world is wondering how Bezos’ 25-year-long marriage with MacKenzie Bezos will end. As soon as the Bezos couple announced their decision to call off their marriage, The National Enquirer also revealed that they had been investigating the Amazon CEO for four months.

The tabloid said they were secretly tracking Bezos across five states and 40,0000 miles. Furthermore, in the process, they found evidence that he has been “whisking his mistress off to exotic destination on his $65 million private jets.”

While people are speculating on a messy divorce battle of Bezos, they are also trying to know more about his new girlfriend. Everything you need to know about Lauren Sánchez and her former relationship.

According to an insider, Sánchez’s husband, Patrick Whitesell (a close friend of Bezos), was unaware of how serious the affair was and how long it was going on. They were having problems in their marriage for quite a while and were trying to “work things out.”

While some say they separated sometime in 2018. Whitesell, a Hollywood agent and co-founder of William Morris Endeavor Entertainment, got married in August 2005 in a star-studded ceremony that cost around $2 million. They have two children together, a son, Evan (born 2006) and a daughter, Ella (born 2008).

Lauren Sánchez was previously in a relationship with former NFL tight end, Tony Gonzalez. And with whom she shares a teenage son, Nikko (born 2001). She was engaged to an NYPD Blue actor, Henry Simmons, until 2003.

Sánchez started flying planes and helicopters as a licensed pilot in 2011. Likewise, she also launched her own film aerial production company, Black Ops Aviation, in 2016. After obtaining her license, she said,

“I had my job, I had a career, and then I found a calling. I loved entertainment and I loved filming, and so I got to combine all of it. Only six percent of pilots are women, and there’s even less in the film industry. So I was like, I want to film movies, that’s what I want to do. I’m living my dream. Everyone says, follow your passion. I loved being on camera and now I still have a camera, it’s just 3,000 feet in the air.”

Lauren has met Bezos for the first time during an aerial video shooting. What’s more, it was for his company, Blue Origin.

Sánchez, 49, is a third-generation Mexican-American, born as Wendy Sánchez (Bezos reportedly uses Wendy as a code name). Further, Lauren grew up in Albuquerque, Mexico. She moved to California after graduating high school. After which, the actress went to El Camino Community College and attended the University of Southern California on a scholarship.

While at USC, she landed an internship as a desk assistant at KCOP-TV in LA. Lauren started working as an anchor and reporter at KTVK-TV before returning to KCOP in 1999. She also became the first Hispanic female ever to anchor at KCOP. And later hosted the first season of Fox’s So You Think You Can Dance in 2005.

Lauren has worked as a reporter on the syndicated entertainment show, Extra. And her work as an anchor and correspondent for the sports magazine, Going Deep was honored with an Emmy. A runner-up of nationwide hosting competition during The View season 2 (2000). Sánchez has often been dubbed as the most beautiful and hot TV anchor.

The Untold Truth of Trina Braxton and Gabe Solis’s Marriage!

Alongside her hosting duties, she has made cameo appearances in numerous movies, including Fantastic Four, The Longest Yard, Saw, We Bought A Zoo and Flight Club.

Lauren Sánchez starred as Lydia Filanjeri, a reporter for Gotham Cable News in the viral video campaign for The Dark Knight and had appeared in TV series like Days of Our Lives and NCIS.