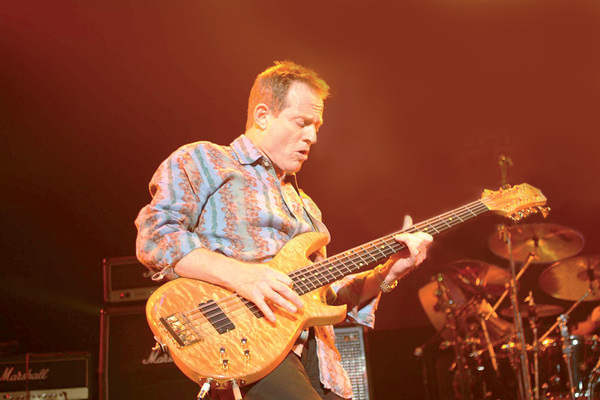 We’re all obsessed with music in one way or another, which at some point has driven us to follow the most visible form of mimicry, air guitars and singing faux pop in bottles. There is no denying that the guitar is one of the most popular musical instruments. With that being said, guitar cults are usually formed after icons are spotted using them.

Bass guitars have been around for some time, and as with cults, there’s a distinct international Led Zeppelin fan following. Along with other band members, John Paul Jones has also earned dedicated fans over the years in his own right. Standing as one of the most popular bassists of all time, he is also one of the reasons that fans look to take up the bass guitar as a hobby or even a profession. With that in mind, we have created a curated list of the Led Zeppelin bassist’s top 10 guitars.

This custom-made guitar is seen in various images and videos from their 2010 tour. It has five double strings and stereo output, so it can send two signals to separate amps and rigs.

John Paul Jones is unimaginable without his Manson custom-made acoustic. Painstakingly made and with a six and twelve strings neck, this whopper is one of the most iconic items of the bassist. Handmade by the very talented Hugh Manson, the instrument also has a mandolin on top. From the beginning of the second leg of the 1977 US Tour on May 18, 1977, to the 1979 song, Ten Years Gone, he has used the Manson Triple Neck on various occasions. He played it again during his solo tours in 1999-2000 for the improvisational piece entitled Triple Neck Song.

This amazing guitar is one that any JPJ fan would know. Led Zeppelin used this iconic guitar for their O2 Arena show in December 2007 and, more recently, in 2010. The notes that play out of this device seem to be in the air for a long time. Plugging in, you get more of a sharp, high end and more sustain.

It was essentially an early baritone guitar tucked into the body shape of a Jaguar. Moreover, comparatively a more recognizable foray from Fender. It is believed that Jones used this on the various recording sessions in the 60s, but it’s not known whether or not he used this bass guitar with Led Zeppelin.

Jones used this during Led Zeppelin’s final years. Available in 8-string variants, the sound coming out of this guitar is shrill and obtrusive.

With the single-coil split pickup and iconic shaped alder body, it first debuted in 1970. Which song do you think was recorded with this guitar? It was used in 1972 for Bron-Y-Aur Stomp, a country music-inflected hoedown and later in 1975-1977 and 2007 for one of the most listened to songs, In My Time of Dying.

Jones bought this solid “offset” double cutaway alder with Bolt-on Maple instrument for $259 in Lewisham, London, England. Led Zeppelin used this primary bass from 1962 to 1968 on most of the sessions. The four strings bass had to go after the 1975 tour as “she was getting unreliable and rattling a lot.”

Jones used this jet black guitar on the 1972 Australian Tour and some dates in the Summer 1972 US Tour for Bron-Y-Aur Stomp. With cutout “F” holes, it features double-cutaway semi-acoustic and bolt-on maple.

Jones started using Hagstrom during his days in Led Zeppelin as early as 1970. Coming with a master volume, power keys, and on/off switches for each pickup, Jones used this guitar for the very loved and appreciated album, Presence, most popularly on Achilles Last Stand.

At first glance, this guitar has often been confused with an Alembic, but it’s not. Historically, this was bought from Don Weir’s Music City, and the bass builder used to work for Alembic. Coincidence! Alembic used this design later on, and Jones had Alembic’s electronics installed. First used in their 1977 US tour, Nobody’s Fault But Mine and Achilles Last Stand were two songs Jones played on this bass. It eventually retired with a warped neck and is currently displayed in the Rock and Roll Hall of Fame in Cleveland, Ohio.

Which is your favorite guitar from John Paul Jones’ great collection? Sound off in the comments.