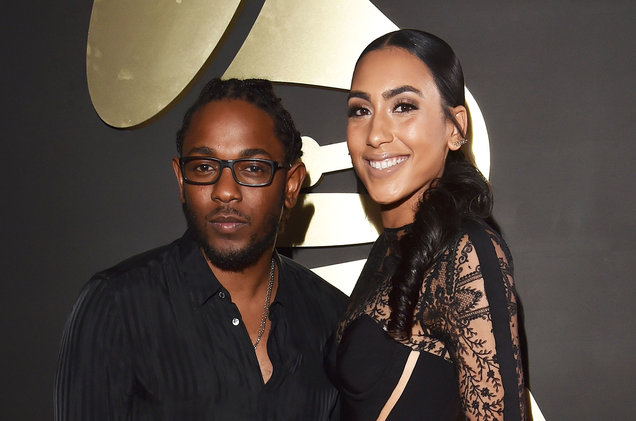 Aesthetician and make-up artist Whitney Alford is best known for being the fiancee of Grammy-winning rapper Kendrick Lamar. Although the 33-year-old is not as famous as Lamar, she has done some pretty notable works.

So, here’s everything you need to know about the fiancee of Kendrick Lamar, Whitney Alford.

Whitney Alford was born on 12th May 1986 to a middle-class family in Compton, California. The town is one of the most troubled towns in LA, having plenty of regular criminal activities.

Besides that, it has also been exposed to vibrant pop and hip hop culture and has given the world astonishing artists, including Ice Cube, Dr. Dre, and Suge Knight.

As per the specifics, we don’t have much information regarding the name and occupation of her parents. But we do know that her father is black and her mother is biracial.

She later graduated with a degree in Accounting from The California State University, Long Beach.

While it is argued that teenage love doesn’t last, Whitney and Kendrick have been together since then. Whitney started dating her then-boyfriend, Lamar, while they were in the same high school.

Before going public, the 32 years old rapper would constantly brag about a loyal friend who had helped him stay focused and motivated. It later led the media to associate him with the model, Lira Galore.

The speculation finally came to an end when the couple made a debut appearance at the Annual Grammy Awards in 2014.

Whitney has also been a topic of conversation in most of his interviews following the public appearances together.

The couple has not specified the exact engagement date yet, but the first time fans spotted the enormous shiny rock on Whitney’s hand was on March 24, 2015. The same day, Lamar released his hit single, King Kunta.

They officially confirmed the news a week later, on April 3, 2015, on the urban contemporary radio station Power 105.1’s The Breakfast Club.

The couple has been engaged for four years and is still not married.

While most people adore these high school sweethearts, a self-proclaimed dark-skinned activist, Rashida Marie Strober, had criticized Whitney Alford for not being “black enough” to marry the rapper Kendrick Lamar.

The Dark Skin is Beautiful campaign manager even called for a boycott of Lamar’s music after hearing about his engagement.

The post was forcefully attacked by fans, which led its author, Rashida takes it down shortly.

Mother to a baby daughter

The news of Whitney being a mother came as a surprise to fans. While the world did not even know about her pregnancy, the 33-year-old welcomed her first baby girl on July 26, 2019.

The couple, who we know is highly private about their personal life, has not yet disclosed their child’s name or has posted any pictures of her on any social media. But their choices of keeping their lives private did not stop the fans from congratulating them.

Despite having a degree in Accounting, Whitney decided to pursue a career that she enjoyed the most. She ended up becoming a licensed make-up artist and aesthetician in LA.

The entrepreneur runs a successful beauty business. She does not take advantage of her fiancée’s fame and believes in working hard and creating her own identity.

Her Instagram account, Blushed by Whit, consists of pictures of her work, including a few photoshoots of Lamar as well. She has also worked on Reebok, Rolling Stones, Ebony, and Billboard Magazines sets.

While being a make-up artist pays good money, we don’t have exact figures regarding her net worth. On the other hand, her fiancée, Kendrick Lamar, has a net worth of $75 million as of 2019.

Everything to know about rapper Ice Cube’s wife, Kimberly Woodruff