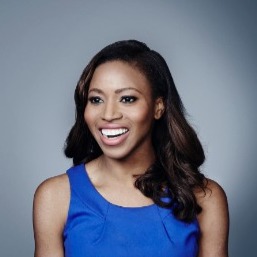 Zain Asher is a renowned British news anchor and journalist at CNN International based in Atlanta.

She was born on August 27, 1983. Zain Asher is of Igbo descent. She was born and raised in London.Zain studied French and Spanish at Keble College, Oxford University. She graduated with a distinction in oral Spanish in 2005. Then, she enrolled at the Columbia University’s Graduate School of Journalism. From there, she earned a master degree in 2006.

In the beginning of her career, Zain worked as a general assignment reporter for News 12 for two years. At News 12, she used to cover political and cultural issues, as well as the local economy in Brooklyn, The Bronx, and Connecticut. Correspondingly, Zain contributed her articles to Forbes.com, CNN Money.com, The Guardian, and The Oxford Reporter.

Then, she served for Money Magazine where she mainly covered careers and investment, focusing on stocks, mutual funds, consumer tech stories, and workplace advice. Finally, Zain Asher got the great opportunity to become the part of CNN.

Zain joined CNN in 2013. Initially, she was assigned as a business correspondent based in New York City to cover economic news from the New York Stock Exchange, U.S. Federal Reserve monetary policy and high-profile IPOs.Nowadays, we can see her anchoring CNN Newsroom Monday to Friday on CNN International.

Zain Asher is the daughter of Arinze Ejiofor and Obiajulu Ejiofor. And, she is the younger sister of Hollywood actor Chiwetel Ejiofor who was nominated for Best actor category at the Oscars 2014 for his excellent role in the film, 12 years a slave.The talented journalist is fluent in French, Spanish, and Ibo (her native Nigerian dialect).

Zain Asher became very emotional on CNN and said Chiwetel Ejiofor’s nomination meant a lot to their family. Zain and Chiwetel had lost their father in a tragic car accident. At that moment, Chiwetel was also in the car. Luckily, he survived after 10 weeks in a coma.

Since the CNN anchor keeps her personal life secret from the media and public’s eyes, there is no information about her past relationships with any guy. Recently, Zain Asher got engaged on April 2016, during her vacation in Florida. So, very soon, the couple is going to tie into the knot.

The famed CNN anchor is very active on Twitter, where she is followed by 14.2K followers. You can follow her tweets @ZainAsher.