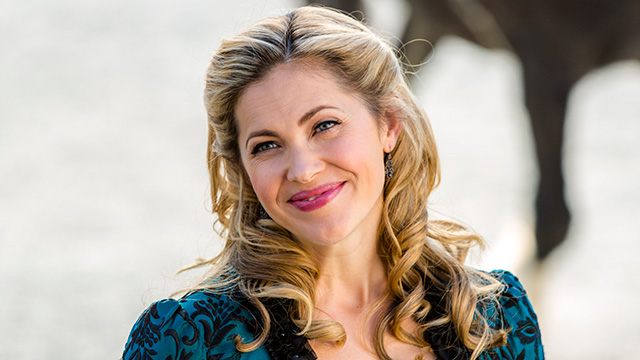 Canadian actress Pascale Hutton is best known for her astonishing performance in the Dramatic Series. While she is widely recognized as Rosemary LeVeaux-Coulter from When Calls the Heart, there are certain things you might be missing out on the honest Rosemary.

So, we have compiled all the necessary information regarding the 40 years old actress Pascale Hutton right below.

On June 16, 1979, Pascale Hutton was born in Creston, Canada. She has not shared any information regarding her parents or siblings. She spent most of her childhood harvesting honey, chasing chickens around the field, and swimming in the raging goat river.

Both her parents were teachers. Her mother, a drama teacher, would often conduct cruises for the kids in their neighborhood. Pascale believes that her mother played a significant role in nudging her towards becoming an actor. She later joined the University of Alberta’s BFA acting program in Edmonton to study Theater.

Career before When Calls the Heart

During the early 2000’s Pascale began searching for a job better for theater. But, after having her thoughts changed, she started seeking roles in TV shows and Movies.

In 2003, she portrayed the role of Nikki Roman in the drama film Hollywood wives: The New Generation. The following year, she appeared in a handful of TV series, including The Days, Dead Like Me and Life as We Know It, and in films, including Ginger Snaps 2: Unleashed and Chicks with Sticks.

Career after When Calls the Heart

Apart from that, she has guest-starred in films like The Unspoken (2015) and S.W.A.T: Under Siege (2017). As of 2019, she has starred in a romantic Hallmark movie, My One and Only, continuing her role in When Calls the Heart.

While we love the on-screen chemistry between Pascale and her co-star, Kavan Smith, in When Calls the Heart. The two are married to entirely different people.

Pascale has been living happily with her long-term husband, actor Danny Dorosh. The couple got married in 2002 before the acting industry even recognized Pascale. They are proud parents of two sons whose identities are still not disclosed.

Unlike most celebrity couples, Danny and Pascale stay strong and have no intention of getting a divorce whatsoever.

Unlike her personal life, the When Calls the Heart star has a pretty active Instagram account. She has been sharing glimpses and on-set scenes of WCTH among thousands of followers. She has also shared pictures of her spending quality time with her kids.

Unlike her personal life, the When Calls the Heart star has a pretty active Instagram account. She has been sharing glimpses and on-set scenes of WCTH among thousands of followers. She has also shared pictures of her spending quality time with her kids.