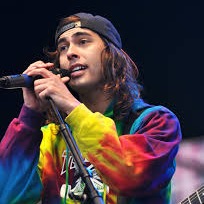 Victor Vincent Fuentes, popularly known as ‘Vic,’ is an American musician widely recognized as the lead singer of the band Pierce the Veil. His brother, Mike Fuentes, is also a musician in the same band.

Born on February 10, 1983, in San Diego, California, Vic Fuentes completed his high school at Mission Bay School. He studied graphic design at San Diego State University but he pulls out his studies before pursuing his musical career.

Immensely talented since childhood, Vic learned to play guitar at a tender age of 7 and started playing in a local band ‘3 Simple Words’ during his high school.

Along with his younger brother Mike, Vic co-founded a band named ‘Early Times’. Later the band was renamed ‘Before Today’ to sort out the issue of copyright claims made by others. Before breaking up, the band released their only album ‘A Celebration of an Ending’ in 2006.

Fuentes and his brother combined with Jaime Preciado, a bassist, and Tony Perry, a guitarist, to form a new band Pierce the Veil in 2007. The band has already released four albums; ‘A Flair for the Dramatic, Selfish Machines and Collide with the sky’ and their latest album ‘Misadventures’.

During his time with the band, Vic toured Asia, Europe, Australia, North America and South America and had chances to play various music festivals such as Rock am Ring and Rock in Park and Slam Dunk Festival.

Besides, Fuentes is also a songwriter. Victor dedicated his song ‘A Match Into Water’ to his girlfriend who was incessantly fighting cancer. Similarly, his song ‘I Don’t Care If You Are Contagious’ was dedicated to a fangirl whose boyfriend died in a car accident.

Vic Fuentes was born to Vivian K. Fuentes and Victor Gamboa Fuentes. He wrote ‘Million Dollar Houses’ as a tribute to his parents, who had been together for all of their life.

Vic is not the man made for consistent relationship. In the last few years he has dated a couple of models. Currently, he is dating Danielle Victoria Perry.