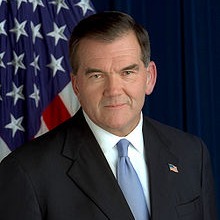 A reputed and renowned American politician, Thomas Joseph Ridge well-known as “Tom Ridge” was born on 26th August, 1945 in Munhall, Pennsylvania, United States of America. Tom holds an American nationality. He has served as a member of ‘United States of Representatives’ and Assistant to ‘President for Homeland Security’. Tom was appointed as a first ‘United States Secretary of Homeland Security’. He is currently serving as a member of ‘Republican Party’. Tom was born to parents, Laura and Thomas Regis Ridge who worked as a traveling salesman. As per his educational background, he completed his school education from the ‘St. Andrews Elementary School’ and ‘Cathedral Preparatory School’. He was awarded with a scholarship to ‘Harvard College’. In the year 1967, he completed his graduation with honors from the same college. Tom joined the United States Army after completing first year at ‘Dickinson School of Law’. In the US Army, he worked as infantry staff sergeant in 23rd Infantry Division. In 1972, he held Juris Doctor ‘(J.D.) degree from the Dickinson School of Law.

Talking about his career, initially he held the responsibility of Assistant District Attorney in the year 1980 where he prosecuted total eighty six cases in two years. After two years of that, he ran successfully for getting a seat in Congress from the ‘Northwestern Pensnsylvania’. Tom was re-elected for six times. He became the first enlisted Vietnam combat who was elected to U.S. House. In the year 1994, he came out as the winner at the election of pro-choice Republican. He held the responsibility of Governor until in the year 2001. Tom implemented some important law and order policies where he supported three stikes law and faster death penalty process. In 2001, he came out as the runner up ‘Politician of the Year’ by the PoliticsPA. Tom worked as close advisor to the GOP presidential nominee ‘George W. Bush’ during 2000 presidential campaign. He got the responsibility to head the ‘Office of Homeland Security’ by the president ‘George W. Bush’. The office was created after the disastrous event of 11th September, 2001 terrorist attacks. In the year 2004, he resigned from the position of president. He mentioned he gave his resignation from the pressure of senior Bush administration officials. After the resignation, he held the responsibility as a founder and CEO of ‘Ridge Global’. He also served as senior advisor to ‘TechRadium, Inc.’.

Turning the pages of his personal life biography, the renowned politician is a married man. He got married to former executive director of ‘Erie County Library System’, Michele Ridge in 1979. From his marriage life with wife, Michele has been blessed with two children named Lesley and Tommy. Till date, there is no news published about him going through divorce with wife, Michelle. It seems that he has been successful to maintain balance in both professional and personal life. He has proved as an ideal husband and father to wife and children. As far now, he is living luxurious and blissful moment with his family.

Tom is a renowned name in United States who has implemented many beneficial laws and orders to the common people. His good looking and positive attitude has been always admired by his followers. Tom stands with the tall height of 6 feet 2 inches. With his good work, he has certainly made his recognizable. Even at the age of 69, he is still working with being associated with the different political parties. He has achieved both fame and name in his career. Tom has not exposed his exact net worth figure in the public yet. His inspirational bio can be observed from his interview. More about him can be extracted from the wiki and other various internet sites.