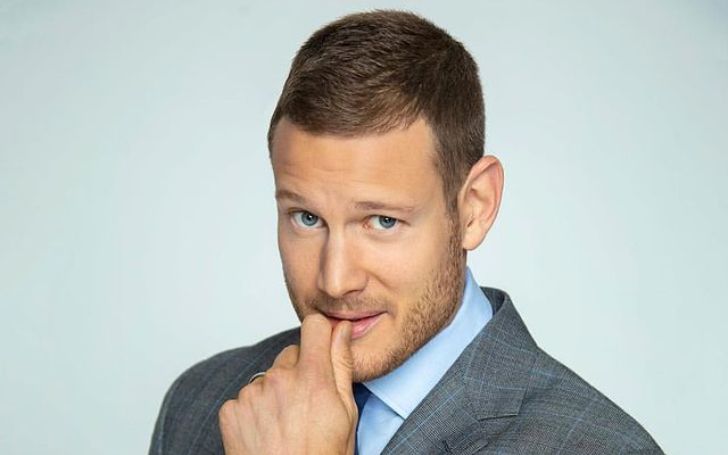 Tom Hopper, originally known as Thomas Edward Hopper, is a popular English actor. He is an entertainer who has appeared on many Television shows and big screens. Hopper is mostly famous for his roles in the action-comedy drama The Umbrella Academy, BBC’s fantasy series Merlin, thriller drama Cold, etc.

The Merlin actor is 37 years as of the year 2022 and follows Christianity. Born in Coalville, Leicestershire, England, he holds British nationality, whereas his zodiac sign is Aquarius. Hopper’s fit physique and bold personality make him look quite attractive.

The Cold actor looks like he grew up in a well-civilized family. He seems to have a supportive family, but he hasn’t publicized more information about his parents besides posting some photos on social media. However, on his Instagram account, he shares his childhood photo mentioning that his mother acted as a ladder for believing in himself and his dreams. Also, he is silent about revealing his siblings in front of the media.

Furthermore, Hopper went to Newbridge High School and Ashby School for his studies. He then discovered his interest in acting while studying there. Later, the Game Of Thrones actor thought of polishing his interest and chasing his dreams by taking it professionally.

Reed Horstmann and his bio!

Finally, Hopper joined a drama school in London named Rose Bruford College. He enhanced his acting skills there. He later got several roles as a theatre artist and soon got movie offers.

Is Tom Hopper Married? Learn About his Affairs

Most of The Umbrella Academy star fans are curious whether he is single or engaged. But here we disclose the fact that Tom Hopper is a married actor and no more single. He married the love of his life, Laura Hopper, on 7 June 2014.

Mrs. Hopper is also into the acting field. The couple first met in 2009 when both were guests of a night party; she shares in her Instagram caption. The couple intimately fell in love from then, and finally, after dating for five years, they turned their affair into an official marriage.

Isabella Pappas and her relationships!

The lovely pair share two cute little children. Daughter Truly Rose and son Freddie Douglas are the important gems of the Hopper family. Recently, they have been living together with a happy marital life; hence, no rumors of divorce are out.

Hopper appeared in many theatre dramas before he came to fame. His first notable role was in the play, As You Like It. Later, he started getting offers in many television series and films.

Furthermore, he appeared in the movie Saxon as a Fishmonger, Marcus in Tormented, and Tom, Leopard in the film Cold. He appeared in several other TV series such as Doctors, Good Cop, Kingdom, etc. Hopper played the main role of Luther Hargreeves in the Umbrella Academy Series, one of his significant works.

After another year, The Saxon cast started giving hits for over a decade. As of now, he has been able to entertain his fans through his excellent acting skills. Hopper also gave his voice to a few characters in movies. Overall, he is successful in building a successful career.

Net Worth Of Tom Hopper, How Popular Is Tom?

Tom Hopper’s net worth is estimated to be approximately $5 Million. He is one of the richest English celebrities of all time. This famed actor makes his earnings from his successful career as an actor.

Hopper hasn’t revealed his actual assets details to the media, but he seems to have made a good income till now. His exact salary amount remains undisclosed too, but he takes a handsome salary from his work. Besides, he is living a comfortable life with his family.

Tom is successful in making a successful career as he has played in many television shows and films. Due to his works, he can grab popularity among fans. Again, Hopper was fortunate to be voted as an Expert Choice by the stage at the Rose Bruford Acting Showcase in the year 2006.

The Black Sails actor is quite popular on his social media accounts, such as Instagram and Twitter. He is usually active on both his online accounts, and both of his online accounts are verified. The regular presence of Hopper on online platforms suggests that he is very friendly.

Hopper has above 1.8 Million followers on his Instagram. So far, he has made more than 480 posts which have crossed millions of likes and comments. He often makes posts about his personal, professional and love life.

Moreover, the Saxon actor also keeps posting on his Twitter account. He has many fans and followers, with over 119.6 K followers. Hopper is very open about his family life; hence he loves sharing photos with his wife and two lovely children.

Besides acting, The vegetable connoisseur Hopper is very fascinated with bodybuilding. On his Instagram account, he frequently posts his workout photos. With his passion for gyming, the 6 feet and 5 inches tall actor Hopper can make a fit and attractive body with a weight of 230 lbs.

The Black Sails actor is fond of traveling. Looking at the Instagram posts of English male film and television actor Hopper, he often travels with his friends and family. He enjoys spending quality time with them.

Furthermore, the Alumni of Rose Bruford College, Hopper, is fond of bikes. He time and again uploads his photos with his stunning bikes. He loves going on rides in different places with his friends. Moreover, Hopper loves eating vegetables, cycling, Reading books, etc.