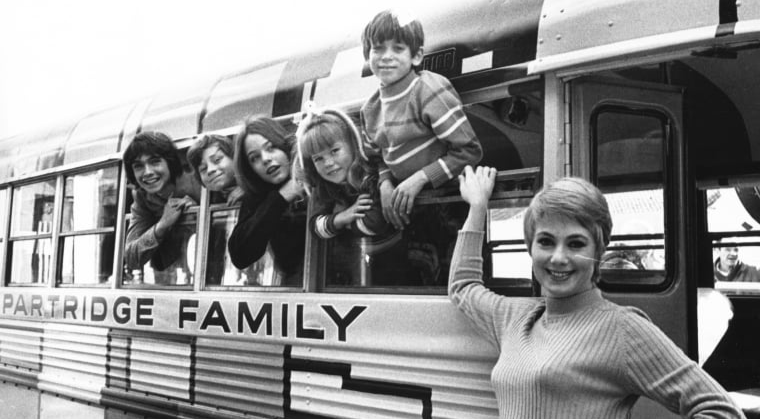 50 years have passed since The Partridge Family drove the colorfully painted tour bus to the top of both the TV ratings and the music charts with the songs like I Think I Love You, I Woke Up In Love This Morning and I’ll Meet You Halfway. The Partridge Family first aired in 1970 and ran for four seasons and 96 episodes until 1974.

The show followed single-mom Shirley Partridge and her five kids who form a rock band and went on tour around the country to support themselves and enjoy success. The television family captured the heart of America in the early 1970s, and their charm is still remembered.

This year marks the 50th anniversary of the show’s premiere, so let’s find out what the Partridge family has been doing now.

Prior to her role in The Partridge Family, Shirley was best known for appearing in musical movies like Oklahoma! (1955), Carousel (1956), and The Music Man (1962). In 1960, she won the Oscar for Best Supporting Actress for her role in the movie Elmer Gantry.

After The Partridge Family, she continued guest starring in different TV shows. In 1979, she starred in Shirley which ran for a season. Apart from being an actress, Shirley is also an accomplished singer having released six studio albums.

Today at 85, Shirley resides in Los Angeles. She is set to appear in the 2021 movie Forgiven This Gun4hire.

Everything You Need to Know About Susan Dey

After the show ended in 1974, David continued his journey as an actor and musician. In 1978, he starred as Officer Dan Shay in David Cassidy: Man Undercover and as David Gallagher in Ruby & The Rockits in 2009. Following more than 4 decades of entertaining the world, David tragically passed away in 2017 at age 67, suffering organ failure.

In 2004, after appearing in two episodes of Third Watch ,Dey announced retirement from acting. The 67 years old actress currently resides in Upstate New York with her husband, Bernard Sofronski. Nowadays, Dey is currently working in the Rape Treatment Center at UCLA Medical Center.

Actor Danny Bonaduce played the role of Danny Partridge in all four seasons of The Partridge Family for which, Young Artist Foundation awarded him the Former Child Star “Lifetime Achievement” Award in 2003.

Following the Partridge Family, Danny went on to become a radio personality. During the late 70s, he worked at Philadelphia’s WEGX-FM. Later, from 1994 to 1996, Bonaduce hosted, The Danny Bonaduce Show on The Loop WLUP.

In 1990, Bonaduce was arrested while attempting to buy cocaine in Florida, when he was there to host an anti-drug campaign aimed at children. From 2005 to 2006, Bonaduce starred in the VH1 reality show, Breaking Bonaduce, which ran for 2 seasons.

Nowadays, the 60 years old actor spends his time between Los Angeles and Seattle with wife Amy Railsback. His last acting role was in the 2019 TV series, The Kids Are Alright.

Former child actor Jeremy Gelbwaks played the role of Chris Partridge in the first season of The Partridge Family. Jeremy stepped down from acting after he was replaced by Brian Forster.

Following The Partridge Family, he went on to complete his studies and graduated in 1982. He worked as a computer analyst while studying chemistry at UC Berkeley. Jeremy appeared in a 1995 Partridge Family reunion on the Danny Bonaduce Show. Gelbwaks, now 58, lives in New Orleans with his wife and works as a technology and business planner.

Child actor Brian Forster replaced Jeremy Gelbwaks as Chris Partridge from the second season of the show. Apart from The Partridge Family, Forster also appeared in a few other shows like The Brady Bunch, Family Affair and Thanksgiving Reunion with The Partridge Family and My Three Sons.

He also lent his voice as Chris Partridge in shows like Goober and The Ghost Chasers, Partridge Family 2200 A.D., and Fred Flintstone and Friends.

After finishing his childhood acting career, he became a race car driver based in Northern California. Then he worked as a science teacher for both elementary and high school levels for some years. Nowadays 59-year-old Brain works in the Northern California Community Theatre.