Skip to content
Home » Entertainment » The Nanny Cast: Where are They in 2019? 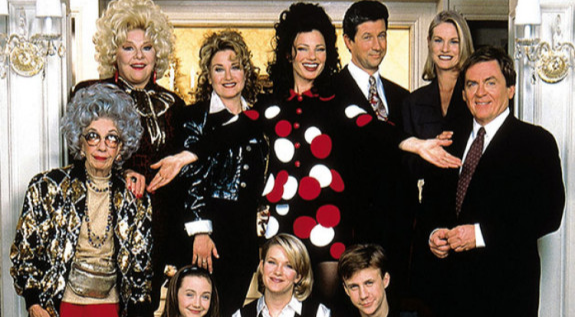 Would you trust some random stranger with your child? I would if she had big hair and was the “flashy girl from flushing.” The dear old Fran “Frannie” Fine ruled the hearts of millions during the 90s in the hit TV show, The Nanny.

This year marks the 26th anniversary of the show, and we have gotten a few hints regarding a possible reboot. But is it going to happen? We aren’t sure about that, but until then, let’s see what the cast is up to nowadays.

The bubbly, outgoing and humorous Fran Drescher was America’s favourite nanny during the 90s. Before playing the role of Fran Fine, she had appeared in a few movies, including American Hot Wax and This Is Spinal Tap.

After The Nanny ended in 1999, she continued appearing in TV shows. In 2005, she starred in Living with Fran’s sitcom, which only ran for two seasons. In 2010, she hosted The Fran Drescher Tawk Show, which got cancelled after the first season due to a low rating.

The actress wrote a book, Cancer Schmancer, after being diagnosed with uterine cancer and undergoing an immediate radical hysterectomy on June 1, 2000. She is currently an outspoken health care advocate and an LGBT rights activist. The 61-year-old actress is set to appear in the upcoming TV show, Indebted.

Before playing the handsome widower, Charles Shaughnessy was known for the role of Shane Donovan in the soap opera Days of Our Lives.

While he was still on The Nanny, he played the lead in several movies, including, Everything to Gain and A Kiss So Deadly.

After The Nanny ended, he appeared in a handful of TV series and movies, including, Get a Clue, Saints and Sinners, CSI: New York, and Super Fun Night. Charles returned to Days of Our Lives in May 2012 and has recently appeared in one of the episodes of Modern Family. Charles, 58, married Susan Fallender and has two kids.

Daniel Davis Aka Niles the Butler

Before appearing as the Butler in Sheffield’s House, Daniel Davis was already a set TV star, having appeared in shows like Texas, Dynasty, Star Trek: The Next Generation, and MacGyver.

As a stage actor, he performed in several Broadway shows, including Wrong Mountain, for which he received a Tony Award in 2000. Most recently, he played the role of Selsdon Mowbray in the 2016 Roundabout Theatre revival of Noises Off at the American Airlines Theatre.

Daniel has actively appeared in TV series like Ugly Betty, Gotham, The Blacklist, etc. The actor recently appeared in the drama series Elementary in 2019.

The self-obsessed business partner of Max and his secret admirer, C.C Babcock, was played by Lauren Lane. Lauren had appeared in a few movies like Interface and Positive I.D. before she played the role of Babcock.

She later starred in several movies and TV series, including Hunter and L.A Law. Lauren also did Theatre acts like Judivine.

Lauren is also a celebrated Broadway star who has worked and appeared in numerous plays. She lent her voice in the 2000 film Gen¹³. In 2004, Babcock reprised her role of Babcock in, The Nanny Reunion: A Nosh to Remember. She currently serves as one of the Department of Theatre and Dance members at Texas State University in San Marcos.

Nicholle Tom came to fame for her role of Ryce Newton in Beethoven’s film series before she played the part of the eldest child in The Nanny.

Following her seven-year stint on the set of The Nanny, she voiced Supergirl in numerous DC animated shows.

Nicholle has been keeping herself busy by appearing in many TV series like Criminal Minds and Castle. She recently guests starred in the 2018 American comedy series, Hollywood Darlings.

Benjamin Salisbury, who portrayed the role of Brighton Sheffield, had a hard time grasping spotlight before and after the show. He voiced The Nanny in the 1996 animated TV series, The Oz Kids.

Benjamin appeared in 2004’s The Nanny Reunion: A Nosh to Remember alongside Fran Descher and other cast members. He is currently working at Universal Studios Hollywood as the director of Operation for the park.

Madeline Zima portrayed the youngest child of Maxwell Sheffield Grace in all six seasons of the show.

In 2003, Madeline chose to play Lucille Ball in the CBS mini-series Lucy and 2004. She starred in the romantic comedy, A Cinderella Story. Apart from that, she has also starred in many movies, including, The Collector, A Monster in Paris and Crazy Eyes.

Her recent TV appearance is in the 2017 TV series Twin Peaks and the 2018 dramatic thriller, Painkillers.