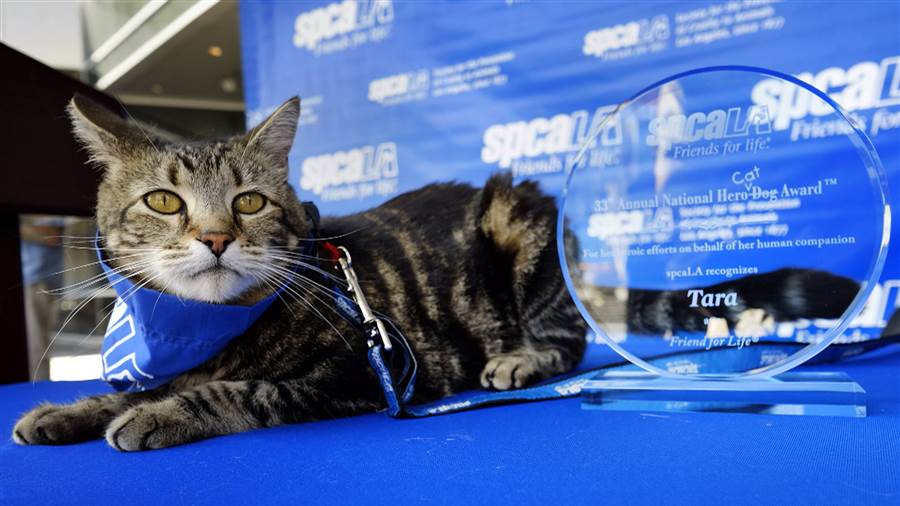 Zatara “Tara” earned the title as “The Hero Cat” after the 13 May 2014 incident where she saved a four-year-old boy Jeremy Triantafilo from a neighborhood dog’s attack.

The Triantafilo family had adopted Tara in 2008. Jeremy is the son of cat’s caretakers. Before Jeremy was attacked by what is described as an eight-month old mix of Labrador and Chow, he was riding a bicycle in his family’s driveway. The dog came running towards Jeremy and attacked him viciously, pulling him down the driveway.

Without caring about the size of the dog which was much larger than her, Tara bolted to the rescue, eventually chasing it away. Tara then returned to Jeremy to check on him. Jeremy’s left calf was somewhat badly injured, needing ten stitches but thankfully he mounted a swift recovery.

Tara’s heroic deed was recorded in a CCTV footage which received more than 16.8 million views within 48 hours of being uploaded on YouTube. The video set the record for being the first in the history to reach 20 million views in just 5 days. As of August 2017, the video has been viewed more than 25 million times.

Tara has been honored with various awards. She is the first-ever cat to receive the Cat Fancier’s Association’s Cat Hero Award. She was awarded the Special Award for Cat Achievement at the Cat Vid Festival. She has also been honored with the Blue Tiger Award, an award only given to the dogs in Military service. She was also awarded the Hero Dog Award, along with a year-long supply of cat food from the Los Angeles SPCA, and became the first non-human to win the title of grand marshal for Bakersfield’s Christmas parade.