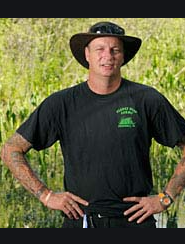 Stephen Keszey is an American TV personality and reptile expert, who is known for appearing in Discovery’s ‘Swamp Brothers.’

Born in Ohio, he went to Revere High School and graduated from the Ohio State University with BA in Journalism in 1992.

After graduation, he moved to New York where he fancied many jobs, including music publicity, and bartending.

Later, he unwillingly gave up on his bartending job and joined his brother, Robbie Keszey, in his reptile business.

Despite being terrified of reptiles, Stephen quickly conquered a professed fear of snakes and started supporting his brother in the farm.

Later, Discovery channel featured the daily activities of the brothers, in the reality series, The Swamp Brothers.

Even after the show ended, the brothers continued providing 24/7 service to animal emergencies across Florida.

On May 19, 2016, they proposed their dream of establishing an interactive zoo in Florida, with two alligators with rare genetic mutation as the center of attraction.

After losing his mother to MDS in 2011, Stephen has also been associated with charity named Castaways Against Cancer.

On May 31, 2018, Stephen took his Facebook to request his friends and followers to donate for a new fundraising mission of CAC.

In recent days, Stephen along with his brother is also involved in teaching students and academician about wildlife and unique reptiles.