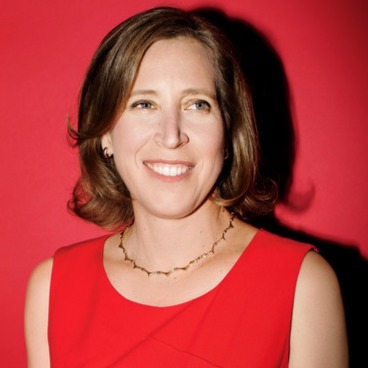 Listed one of the richest American self-made women in Forbes Magazine, Susan was born to mother, Esther Wojcicki, and father, Stanley Wojcicki. Esther, mother of Susan was an educator of Russian; where as her father was a professor of physics at Stanford University. She is blessed with two siblings; Janet and Anne Wojcicki.

Talking about her personal life, Wojcicki got married to Dennis Troper on August 23, 1998, in Belmont, California. Dennis Troper is an operations executive at Google. The couple has five children. The couple is living happily.

Susan Wojcicki, the leading and inspiring woman of the today’s world with her gusto and endeavor has helped her receive a huge net worth of $350 million dollars. She is serving as of now the CEO of YouTube.

The technocrat, Susan Wojcicki is the CEO of widely ackno=wledged video sharing website YouTube. She has ruled the global techno world. Her astounding credit to the technology world has given her name as “the most important person in advertising”.

Susan has brought up the new innovation and technological advancement in the global changing world. The technology executive utmost effort and inspiration have honored on Time Magazine’s list titled The 100 most influential people.

Susan was born on July 5, 1968 in Santa Clara County, California, USA. Her childhood was influenced by the American mathematical scientist, George Dantzig as a neighbor in Stanford campus. After completing high school level from Gunn High School, Wojcicki graduated in the subject history and literature from the Harvard University. Then after, she uncovered her fascination towards technology.

In pursuit of a career in technology, Susan completed her master’s degree from the University of California, Santa Cruz in Science in 1993. Later, she expanded her knowledge doing MBA from the UCLA Anderson School of Management in 1998.

Wojcicki, the leading lady in the dominating techno world worked in various multinational companies before joining Google. She served in the ruling techno company, including, Intel, Bain and Company and R.B. Webber & Company.

Later in the year of 1999, she initiated her step in Google as a marketing manager in 1999. At that time, she has most credited the advancement of the several Google products including Google Books and Google Images.

Susan determination to the expansion of Google services raised her to the next level as a senior vice president to the Advertising & Commerce department. During her tenure, her utmost dedication totally inspired the marketing and advertising sectors deriving the products in lead, such as Double Click, AdWords, etc. She has a major hand in enlarging the revenue of the Google from the AdSense. AdSense is the second biggest sources of Goggle’s revenue.

Later the Google board purchased the YouTube and DoubleClick in between 2006/07. In the year of 2014, her deep rooted dedication to the enlargement of the Google services has made her a CEO of YouTube.