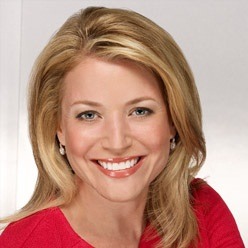 Susan Hendricks is an anchor currently associated with HLN and CNN based in CNN’s headquarters. She appears at CNN.com’s on-demand news service -the CNN Pipeline. In addition, she occasionally covers for Robin Meade on her show – Morning Express with Robin Meade.

Susan was born on August 29, 1973, in New Brunswick, New Jersey. She was born the eldest of her parents Marie Hendricks and William John Hendricks. Her middle-class family could not necessarily provide her a smooth childhood.

However, after years of hard work, she defied her family’s financial situation and grew up to build a successful career.

Susan completed her high school from Hun School of Princeton. During high school, she pursued her interests in acting and dancing. She participated in drama classes and ballet performances. She got her bachelor’s degree in mass communication from Arizona State University.

While at university, she was inspired to pursue a career in TV journalism by the famous Walter Cronkite. Walter was a guest speaker at one of her journalism classes.

Immediately after graduation, Susan joined the Comcast cable. She was later hired at the KESQ-TV and worked as a field reporter. After two years in KESQ, she joined the NBC affiliate KMIR as an anchor of morning shows. After working for KMIR for few years she headed to Atlanta and joined the CNN Headline News. At CNN, she covered breaking stories and performed as an entertainment correspondent.

Highlights of her career at CNN came after she covered Santana High School shootings. She covered popular yet tragic stories including the death of 40th President Ronald Reagan, flooding in Atlanta, Hurricane Katrina and the execution of Saddam Hussein. She also excelled at interviewing high profile personalities.

Susan has an amazing personality. She has an attractive figure even at 43. She has blonde hair and stands at a height of five feet and four inches. She measures an approximate 34-24-34 inches.

Susan occasionally flaunts her hot looks on-air by suitable wearing elegant and curvaceous formal dresses. She is considered one of the hottest female journalists.

Susan Hendricks has a happy marriage with husband Joe

Susan is happily married to husband Joe Carter. Joe Carter is a former sports anchor at the HLN and the CNN. He currently co-owns a production company with Susan – the Hencar Productions.

Susan gave birth to their son on 6th June 2016. The couple named their first son Jackson Patrick Carter. They also have a daughter. The happy family currently lives in Atlanta.

No rumors of their divorce or an extra-marital affair can be traced. Fair to assume that the couple shares an amicable marriage and will continue to do so.

Susan Hendricks is an inspiration to young female journalists.

Susan’s success story has been taken as an inspiration by aspiring youths. Her two decades long hard work has landed her a noteworthy position at CNN. She has an estimated net worth of $5 million. She has 14.8K followers at @SusanHendricks as of November ’16.

More updates can also be found at @ecelebrityfacts