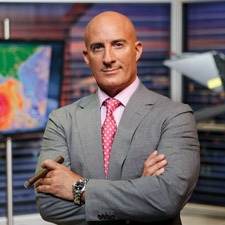 One of the most recognized weather anchors, Cantore covered major weather events like Hurricane Ike, Katrina, Gustav, Rita, Isabel, Sandy, Bonnie, etc. He was more often chosen for field coverage since the ratings for the Weather Channel used to get increased.

His prior works at TWC included Winter X Games, NFL Games, PGA tournaments and developing Fall Foliage Forecast. He is a respectable member of The American Meteorological Society and The National Weather Association.

He received the AMS Television Seal Of Approval and the NOAA-David S. Johnson Award in 2002 for his contribution in environmental satellite technology.

Cantore frequently fills in for Al Rocker on The Today Show and serves TWC series, Storm Stories as the narrator. He went on the location of popular sports events like the 2012 London Games, the annual NHL Winter Classic, and the 2010 Vancouver Games to report weather.

He is featured in the ECHL’s Stockton Thunder entrance video and includes his introduction in the beginning of the video. He has been named “The Rock Star” Of Meteorologists by Algis Laukaitis of the Lincoln Journal Star.

Cantore is known for his extraordinary ability, tenacious style, and hard work. He has spent 25 years of his life as a meteorologist and has collected a huge net worth of $3.5 million. His high net worth concludes he earns a high salary as well.

Previously married, Jim Cantore is the father of two children. Who is he dating?

The couple separated in 2009. Tamra is diagnosed with Parkinson’s disease and both of their children suffers from Fragile X Syndrome.

Jim supports FRAXA (Fragile X Research Foundation) and does charities for these diseases. The 5 feet 7 inches tall meteorologist is currently dating CNN employee Andrea Butera. They have been together since 2010.

It shows how much his work is appreciated by people. His immense knowledge and presenting skill have impressed a lot of people.

Jim Cantore is an American meteorologist as well as a storm chaser for the Weather Channel who is best known for the coverage of some major weather disaster. A skilled meteorologist having an ability to express some complicated weather events in such a way that average viewers could understand.

Born on February 16, 1964, he is currently 52 years of age. Native of Beacon Falls, Connecticut, Cantore is of Italian descent. He belongs to white ethnicity.

No information is available regarding his childhood and parents. He hasn’t talked about his family background in media.

Jim received a Bachelor’s degree in Meteorology and graduated from Lyndon State College. He was hired by The Weather Channel when he was in college and got an opportunity to appear on air in July 1986.