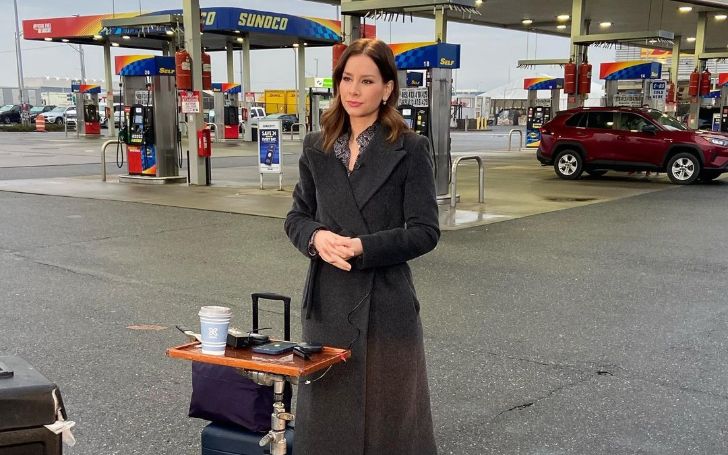 After being the finalist of season 4 of The Apprentice, Rebecca became a household name. Moreover, please find out more about her and her married life below. Let’s start with Jarvis’ bio!

A look at Rebecca Jarvis’s early life and education background

On December 14, 1981, Rebecca Jarvis was born in Minneapolis to parents Gail Jarvis and James T. Jarvis. Her father is a lawyer, and her mother is a financial columnist for The Chicago Tribune. She graduated from St. Paul Academy and Summit School in 1999.

In 2003, Rebecca joined the University of Chicago, from where she graduated, majoring in economics and law. After that, she studied international economics and business at Sciences Po and Paris Dauphine University.

Rebecca also involved herself in social work. She has raised over $750,000 for a children’s charity. She held the title of People’s “20 Teens who will change the world.” And she even earned the “Point of Light” award for advocacy for disenfranchised teens and children.

Rebecca Jarvis is one of the well-noted ABC journalists

Since her high school days, Rebecca Jarvis started contributing her valuable time in the journalism field. What’s more, she initially worked as an NYLC Youth Reporter for the National Youth Summits. Jarvis, in fact, served with National Youth Leadership Council on their Youth Project Team.

Rebecca’s career breakthrough came after serving as a general assignment reporter for CNBC. She likewise earned wide popularity after her job as a financial reporter at CBS News. Hardworking and dedicated news anchor Rebecca has mesmerized all audiences with her captivating personality.

Rebecca left CBS after landing a job as Chief Business and Economics Correspondent of ABC and has worked ever since. She has been hosting the show Real Biz with Rebecca Jarvis, where she is also a creator and managing director.

Jarvis reports for all news shows within ABC, including Good Morning America, ABC World News Tonight, Nightline, 20/20, and This Week with George Stephanopoulos. With ABC News Radio, she has launched a new podcast, No Limits with Rebecca Jarvis.

Rebecca Jarvis married an investment banker Matthew Hanson. Furthermore, Jarvis and Hanson exchanged their vows in an intimate ceremony. The couple exchanged rings in December 2010 and tied the knot on January 28, 2012, at McNamara Alumni Center.

After graduating from college, she briefly worked at Citigroup in NYC and Bank of America Securities. Fun fact, she started dating her now-husband, Matthew, while working in BoAS.

Rebecca and her husband, Matthew, welcomed their first child in 2019. Moreover, the couple gave birth to Isabel Noemi Jarvis Hanson. Besides, Jarvis and Hanson lead a healthy married life. And so, no news or rumors about a divorce plagues the couple.

Please visit us on our webpage to find more fun bios and topics, E-Celebrityfacts!