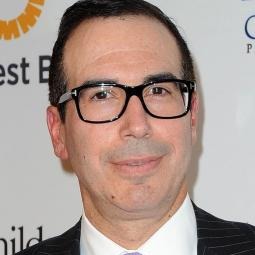 Steven Mnuchin is currently serving as the 77th United States Secretary of Treasury. The American banker and former hedge fund manager worked for Goldman Sachs for 17 years. He has been cited as a world-class financier and businessman and ‘king of bankruptcy’, who bought several failed banks during the 2007-2008 financial crisis and rebuilt them.

He is also a film producer and has worked on dozens of successful movies since 2014. Some of them include X-Men Series, The Conjuring series and Mad Max: Fury Road.

Steven Mnuchin is the son of a banker

Steven Terner Mnuchin was born on 21st December 1962, in New York City, the U.S. to Robert E. Mnuchin and Elaine Terner Cooper. His father was a partner at Goldman Sachs and was a member of the management committee. Robert is also a founder of the Mnuchin Gallery, an art gallery in New York City. 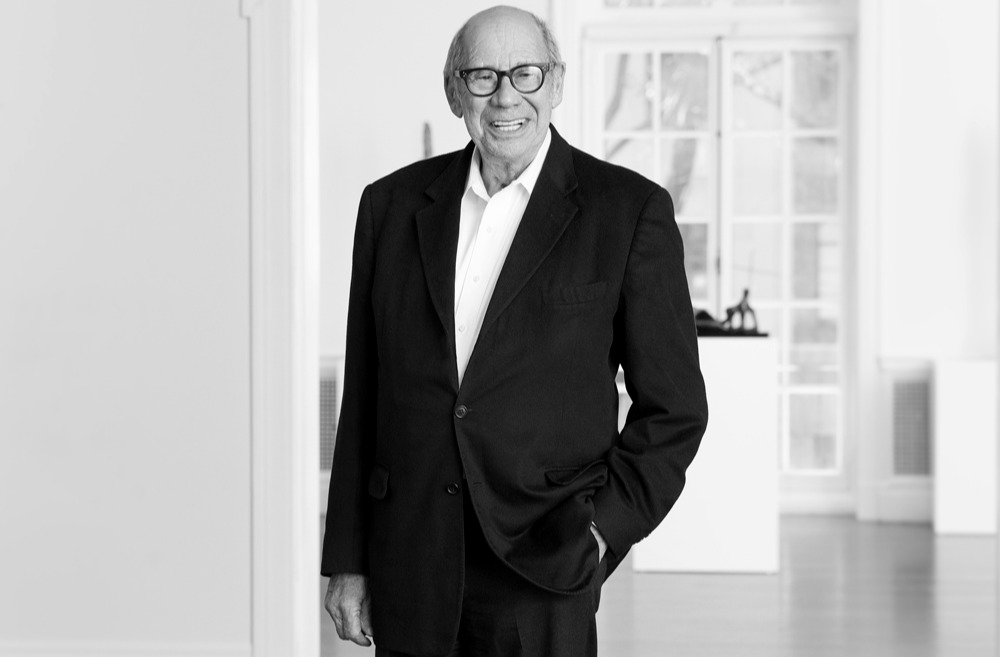 Steven completed his schooling from Riverdale County School in NYC and later graduated with a bachelor’s degree from Yale University in 1985. While at Yale, he was a publisher of the Yale Daily News. He entered an investment bank, Salomon Brothers in the early 1980s as a trainee.

He developed his interest towards banking and finance while studying at Yale as he shared a room with businessman, Edward Lampert, and lawyer, Salem Chalabi.

In 1985, Steven joined Goldman Sachs, where his dad had been working since the 50s. Started in the mortgage department, he earned the partnership of the finance company in 1994. From November 1884 to December 1998, he held the position as the head of the Mortgage Securities Department.

For about a year from December 1998 to November 1999, he handled departments of mortgages, money markets, U.S. governments, Currency and Commodities Division, municipals at Fixed Income. He was the member of executive committee and co-head of technology operating committee, from late 1999 to early 2001. 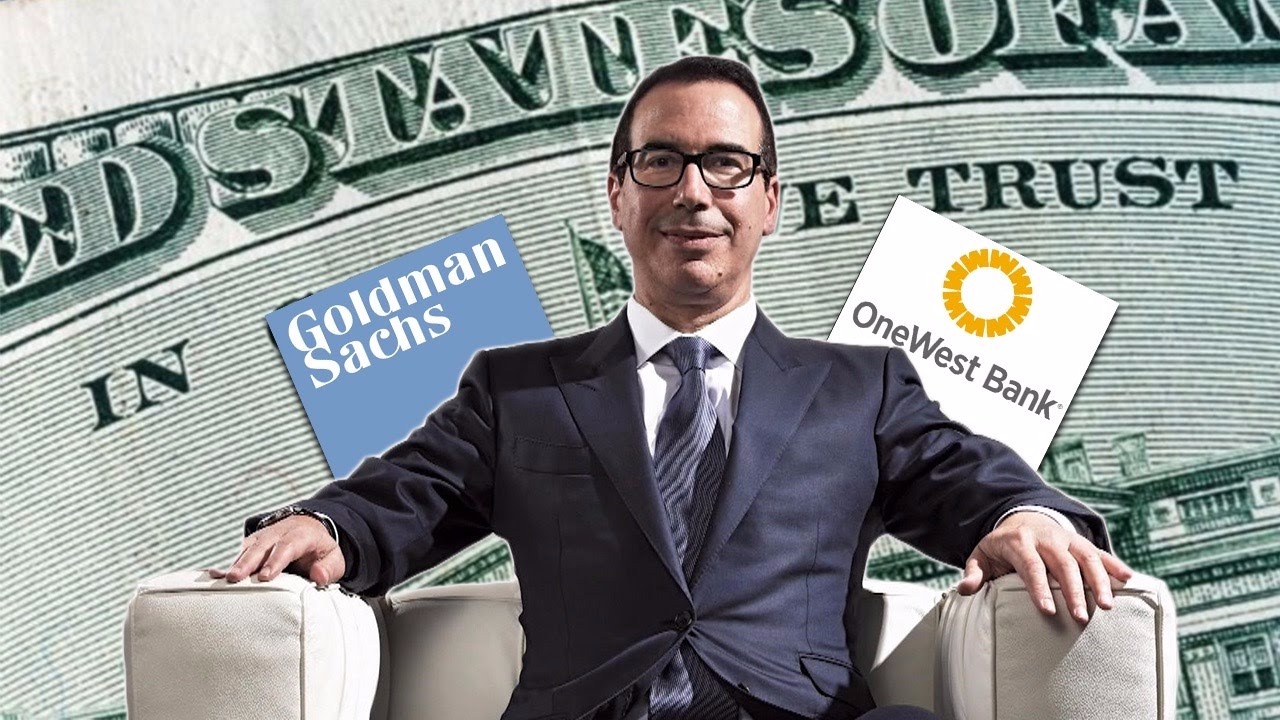 Until December 2001, he held the position of Executive Vice President and co-chief Information Officer. Finally, after 17 years in 2002, he left Goldman Sachs with an $46 million of company stock and $12.6 million in compensation.

Afterwards, he briefly worked as a vice-chairman of hedge fund ESL Investments, which is owned by his Yale roommate Edward and the following year he founded a company SFM Capital Management with financier George Soros. Then, with two former Goldman partners, he founded a hedge fund called Dune Capital Management, which later invested in at least two Donald Trump projects, including Trump International Hotel and Tower in Honolulu and its namesake in Chicago.

In 2009, a group led by Steven bought California-based residential lender IndyMac, which owned $23.5 billion in commercial loans, mortgages, and mortgage-backed securities. The purchase price was $4.7 billion less than its book value. Thereafter, IndyMac was renamed OneWest Bank, where he served as chairman and CEO. 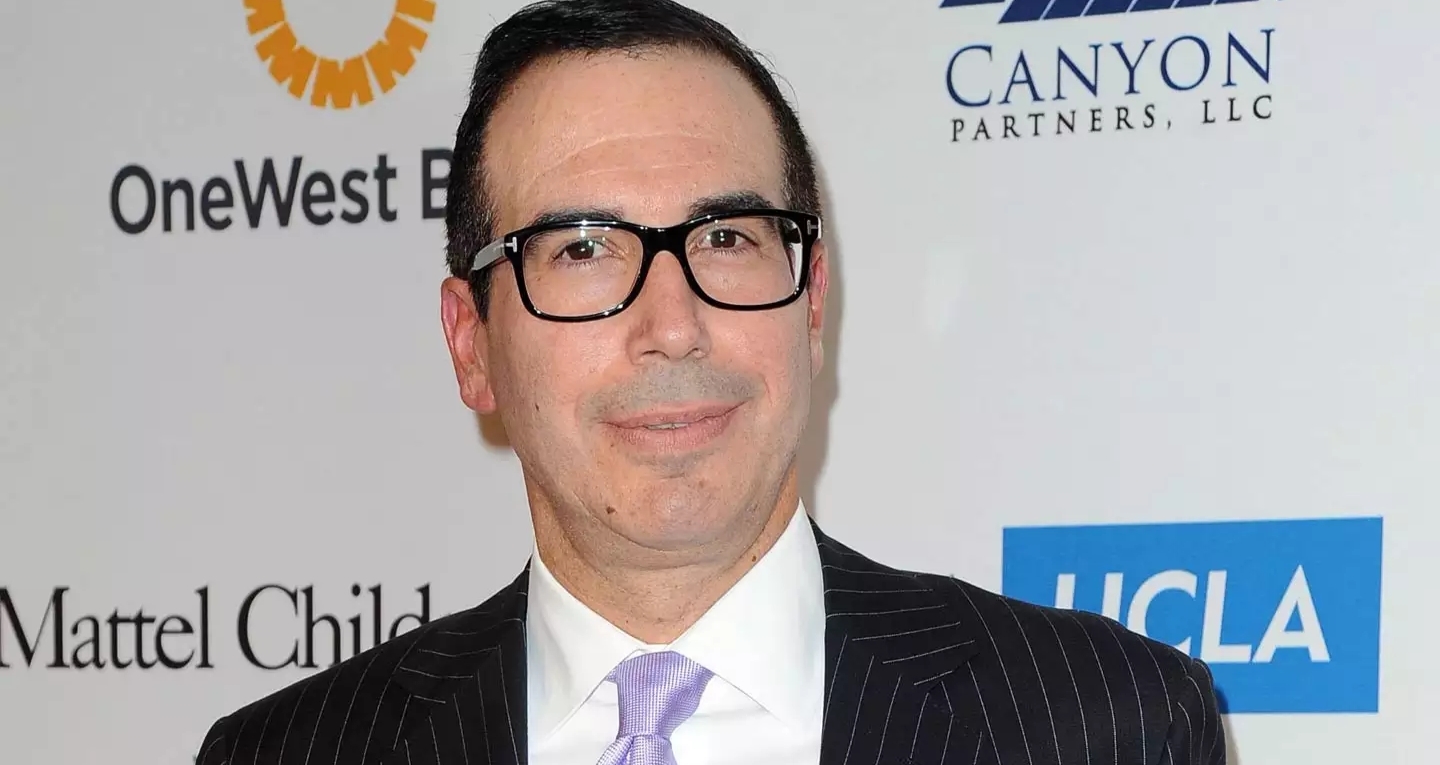 He then bought several failed banks, including First Federal Bank of California and La Jolla Bank. Likewise, OneWest was profitable a year after he bought it and is now the largest bank in Southern California, with worth $27 billion.

He sold OneWest, which was bought for $1.6 billion, to CIT Group for $3.4 billion in 2015 and remained as a board of directors of CIT Group until December 2016. He resigned from the position after he was selected as a nominee for Secretary of the Treasury.

Steven Mnuchin has invested in dozens of movies

In 2004, Mnuchin founded RatPac-Dune Entertainment as a side business with a financier, James Parker, and film producer, Brett Ratner. He has involved in the production of several notable movies, including Avatar and X-Men film franchise.

He has been an executive producer of dozens of movies since the year 2014. Collaborating with Parker and Ratner, he produced Mad Max: Fury Road and American Sniper. Reportedly, Mnuchin also served as the co-chairman of the film producing company, Relativity Media but left it several months before it went bankrupt. 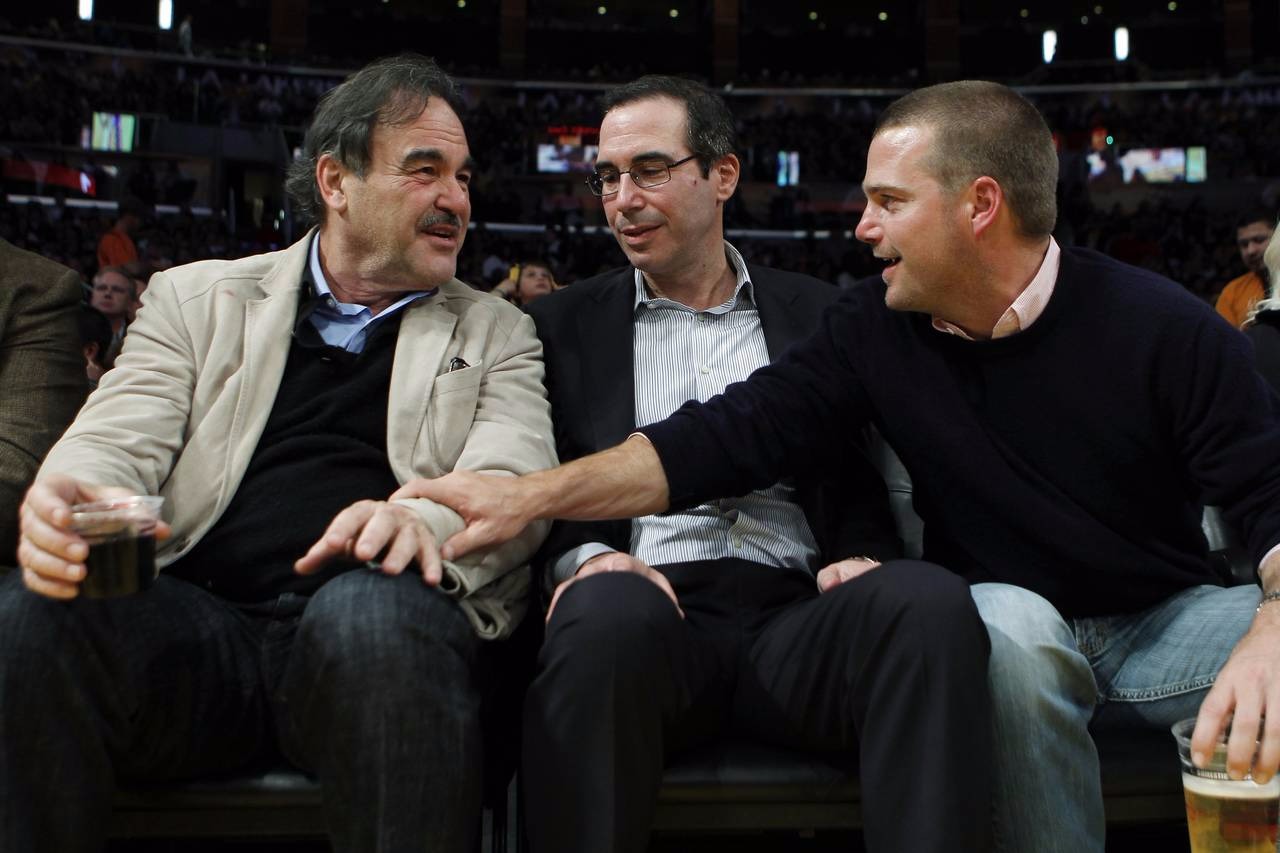 A source close to the company clued that he had left because of the conflict of interest between his duties at OneWest and Relativity. He executive produced the comedy feature The Lego Movie, sci-fi film Edge of Tomorrow, Annabelle and Inherent Vice in 2014.

He was also an executive producer of popular 2015 released movies, including Entourage, The Intern, and In the Heart of the Sea and 2016 released movies like The Legend of Tarzan, Batman v Superman: Dawn of Justice, The Conjuring 2, Suicide Squad, Collateral Beauty and many more. Likewise in 2017, he executive produced Hollywood hits like Wonder Woman, Fist Fight, The Lego Ninjago Movie, The House, The Disaster Artist and others.

Mnuchin had been involving in politics donating money to campaigns before Donald Trump’s presidential campaign in 2016. Between 1995 and 2014, he donated over $100 thousand to politicians and political organizations. He donated over $400,000 to the Republican party in 2016. Before that, he had been donating to the Democratic party.

In April 2016, Trump offered him to be the national finance chairman of his campaign. He brought unprecedented experience and expertise that benefitted the Republican Party and the campaign. 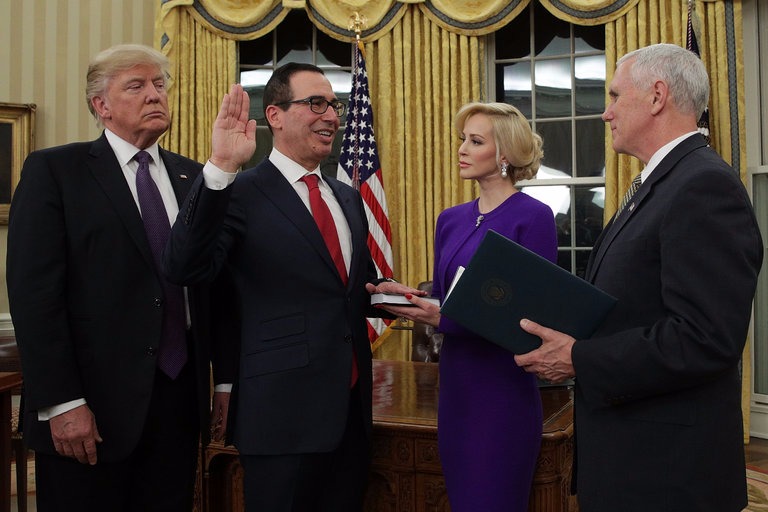 Steven Mnuchin has been married thrice

Steven got married to Kathryn McCarver in 1992 and divorced in 1998. Then, he exchanged his second wedding vows with Heather deForest Crosby in 1999. 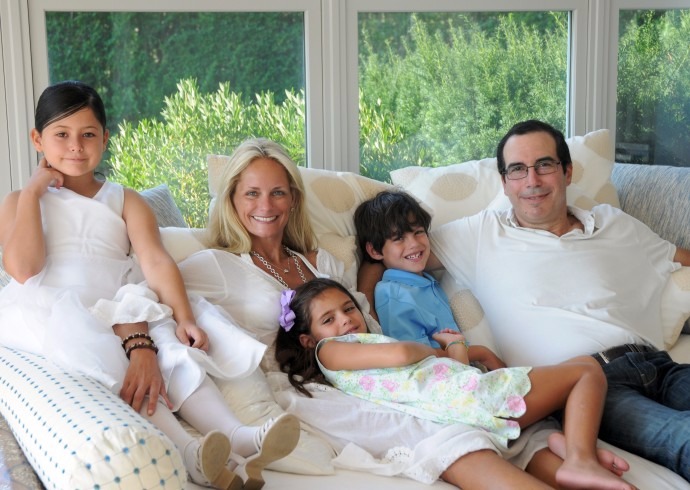 The couple welcomed three children, including daughters: Emma Mnuchin and Dylan  Mnuchin and a son, John Mnuchin. The family of five moved to $26.5 million house in Bel Air, Los Angeles in 2009 and lived together Steven and Heather ended their marriage with an official divorce in 2014. 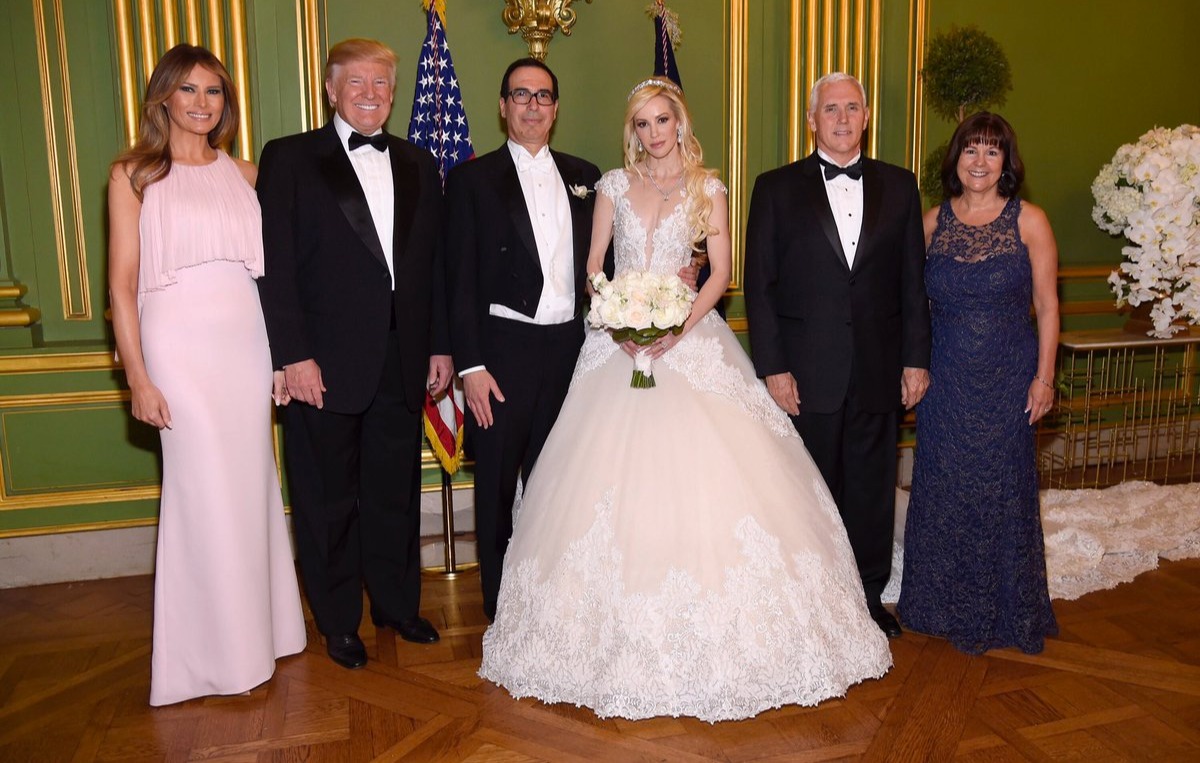 Since June 2017, he has been married to Louise Linton. President Donald Trump and First Lady Melania Trump graced the wedding ceremony with their presence. Vice president Mike Pence officiated the ceremony.

The couple first met in 2013 in Los Angeles and soon took their relationship to a romantic level. Currently, they reside in $12.6 million home in Massachusetts.