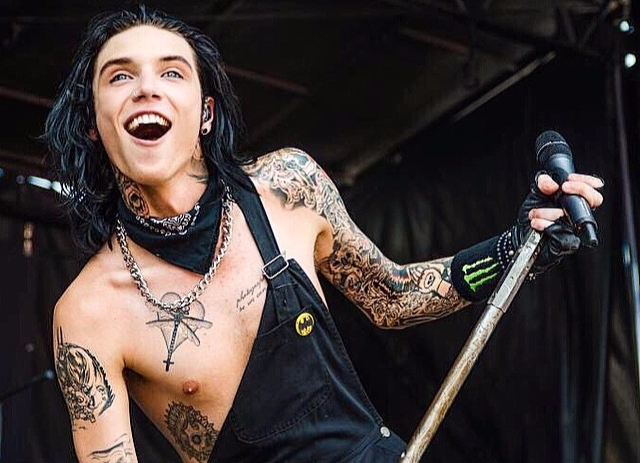 Andy Biersack, best known as the founder of the American rock band Black Veil Brides, is also the lead vocalist of the same band but have recently released a solo album The Shadow Side in 2016.

Born on December 26, 1990, he is currently 25 years old. Native of Cincinnati, Ohio, he was born to a catholic family.

He the son of Chris Biersack and Amy Biersack. He went to Catholic Elementary School.

Since his school days, he was very much interested in music and used to listen to The Misfits, The Damned, Avenged Sevenfold, The Dropkick Murphys etc. For his taste of music, he used to get bullied in the school.

He attended Cincinnati’s School for Creative and Performing Arts, from where he did major in drama and vocal music. Before graduating, he moved to Los Angeles to pursue his career.

At the age of 14, Andy Biersack went to pursue his dream

When he was 14 years old, he formed a band with his friends called Biersack. The band did well and eventually made a name in the market and is now known as Black Veil Brides.

In 2009, the band signed their first record with the independent label StandBy Records. They released their first music video Knives and Pens in which they enacted the earlier bullying. The song has accumulated over 200 million views.

Their first album We Stitch These Wounds (2010) ranked No. 36 on the Billboard Top 200 chart and on No. 1 on the Billboard Independent chart. Their second album was Set The World On Fire, the third album was Wretched And Divine: The Story Of The Wild Ones.

After their fourth album, he released his solo They Don’t Need To Understand followed by The Shadow Side. Before singing, Andy was also seen in some commercials including AT&T and Montana Meth. He has a net worth of $2.5 million.

Andy Biersack has been in the news for other stuff too

He has been in news for his injuries too. One caused him major injury when he fell from a 15-foot stage.

He has won two accolades till date and been nominated twice. He won Revolver Magazines’s 100 Greatest Living Rock Stars 2011 and Kerrang! 50 Greatest Rock Stars In The World Today.

Formerly known as Andy Six, Biersack got married to his current wife Juliet Simms on April 16, 2016. She was the former front woman of Automatic Loveletter and also the runner-up of The Voice Season 2. He has a long list of girlfriends before getting married. The list includes Lexus Amanda, Scout Taylor-Compton, Layla Allman, Hanna Merjos and Juliet Simms.

Andy dated actress Scout Taylor-Compton for 5 years, from 2005 to 2011. The song The Mortician’s Daughter was dedicated to her. Andy dated vocalist Layla Allman in 2010 but broke up only after 17 days. Then, he dated socialite Hanna Merjos for 7 months. Andy then dated his ex-girlfriend’s friend Juliet Simms on July 21, 2011, and finally married her. The couple is not yet parents.

Talking about his appearance, Andy Biersack is an immensely good looking guy with lots of tattoos. He has a tall height of 6 feet 3 inch and a weight of 68 kg. His slim body is covered with various tattoos and has a ring on his nose and lips. He tries different hairstyles frequently. The dashing and talented singer Andy Biersack can be followed on his Twitter and Instagram account @AndyBlack.