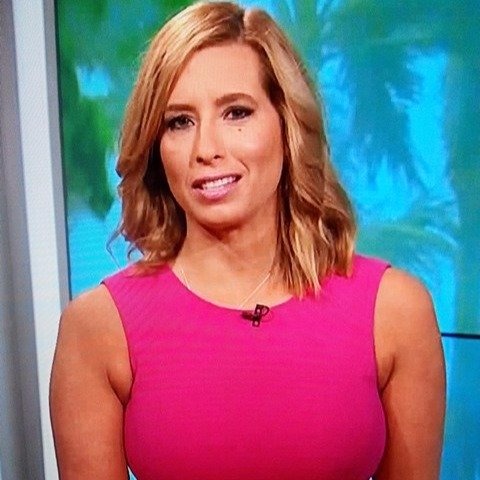 Stephanie Abrams is an American TV meteorologist currently working with The Weather Channel. As for her current job, she serves as a co-host in America’s Morning Headquarters (AMHQ), alongside Jim Catrone and Jennifer Carfagno.

Born on October 27, 1978, Stephanie Abrams is an American television meteorologist. Besides, Stephanie graduated with a Bachelor of Science degree in Geography from the University of Florida.

Abrams is a member of the National Weather Association and the American Meteorological Society, where she served as a president from 2002 to 2003.

Stephanie Abrams and her excellent grades helped her get a position as a morning meteorologist at ABC-affiliate WTXL. Furthermore, her on-air work started in early 2003 after joining The Weather Channel.

In 2006, she began co-hosting the show Abrams and Bettes: Beyond the Forecast alongside meteorologist and storm chaser Mike Bettes. Later, they both shifted to Weather Center.

Before getting the show, Abrams and Bettes worked as a reporter and fill-ins and co-hosted the show Weekend View.

Stephanie co-hosted Wake Up With Al, alongside Al Roker, from 2009 to 2015. She occasionally joined AMHQ during that period and reported the 2010 Winter Olympics live from Vancouver for both shows.

In 2014, Abrams had a cameo appearance in Sharknado 2: The Second One.

Stephanie served as an interim weather anchor on Weekend Today until Dylan Dreyer arrived. Similarly, she is now one of the three-weekday hosts of AMHQ alongside Jim Catrone and Jennifer Carfagno. She also occasionally fills in for Roker on NBC’s The Today Show.

Everything you need to know about AMHQ co-host Jen Carfagno!

Abrams earns an estimated salary of $180000 yearly. What’s more, the reporter has gathered a net worth of $7 million to date.

How much were Al Roker’s salary and net worth in 2017? Know his income sources

Find out Mike Bettes’ salary and net worth

Stephanie Abrams announced her engagement earlier in February this year. However, details about her fiancé are still under wraps.

Stephanie married Mike Bettes, her co-host in the show Abrams and Bettes: Beyond the Forecast. Like her current relationship, her marriage and divorce stayed lowkey.

Mike Bettes and his wife Allison are heading towards their fifth wedding anniversary. Details about his gay rumors