Skip to content
Home » Entertainment » Where is GearZ host Stacey David? What is he up to now?

Where is GearZ host Stacey David? What is he up to now? 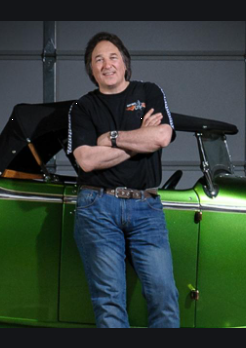 An American television personality and car-customization expert, Stacey David is best known as the host of TV series, GearZ.

He was born and raised in Boise, Idaho.

He began building go-karts using 440cc snowmobile engines when he was still in middle school.

Stacey attended Boise State University, only to spend most of his time at the local racetrack.

After polishing his skill as a car mechanic, Stacey moved to Nashville, Tennessee and opened his own custom car shop, Rattletrap.

In the late 1990s, Stacey had the opportunity to host one of Spike TV’s highest rated show, ‘Trucks!’. He worked there until 2005.

Since 2007, he has been hosting a TV show, Stacey David’s GearZ, which first aired on ESPN2, then on Speed Channel and later on MavTV.

In January 2017, the show was moved to Velocity television network.

He is an accomplished singer and entertainer, having toured with various recording artists numerous times.

On March 12, 1993, he married Kathryn David who serves as a VP of finance at Rattletrap.

He is estimated to have a net worth of $3 million.