Skip to content
Home » Entertainment » Sofia Vergara and husband Joe Manganiello wedding was a star-studded affair, her son walked her down the aisle

Sofia Vergara and husband Joe Manganiello wedding was a star-studded affair, her son walked her down the aisle 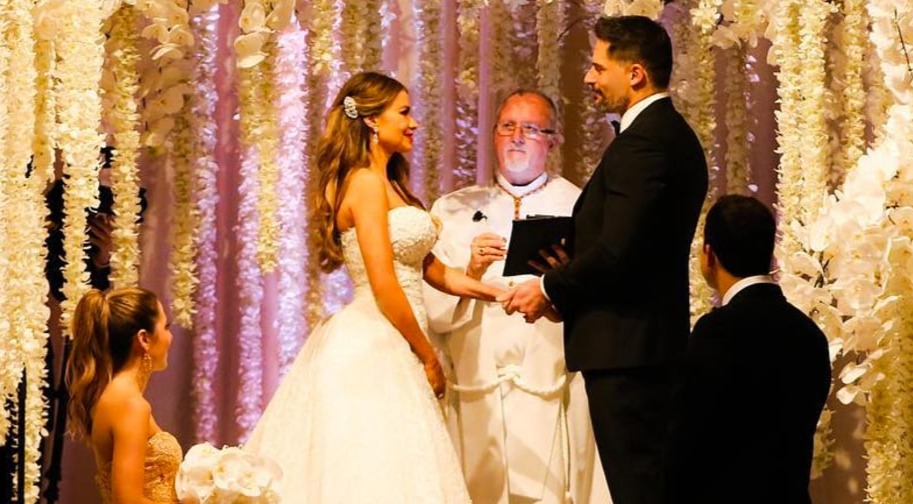 Sofia Vergara got married to her husband, Joe Manganiello, in November 2015. One of the highlights of the “fairy tale” wedding was that she was walked down the aisle by her 25-year-old son, Manolo Vergara. Sofia, 45, is known for her “striking looks and voluptuous figure” and has a net worth of 100 million.

Sofia had the wedding of the century: most lavish, romantic and star-studded

The 43-year-old was dressed in Zuhair Murad Couture. She walked down the aisle with very handsome Manolo (23-year-old son from her previous marriage). The on-going instrumental version of Amanda McBroom’s The Rose, angelic combination of white blossoms and crystal chandeliers gave the Florida ceremony a fairy tale outlook.

Later, Sofia and her husband danced to the “The way you look tonight!” They were then joined by popular celebrities, including Reese Witherspoon, Channing Tantum and “Modern Family” co-stars. Not only that, Pitbull live-performed!

This is Sofia’s second marriage. She was married to Joe Gonzalez for two years from 1991 to 1993.

Sofia and Joe married after two years of relationship – a much desired “happily ever after”!

Sofia and Joe are undoubtedly one of the hottest celebrity couples. Sofia met Joe two years ago through a mutual friend Jesse Tyler Ferguson, her co-star on Modern Family. Sparks flew immediately after their first meeting: the printed napkins at the wedding said “He had me at ‘Hola’”.

Joe is an American actor, director, producer and author. Joe and Sofia dated for two years. They were engaged a year before their marriage in November.

Sofia is still very much in “eternal” love with Joe. A year into the marriage, the couple have most certainly gotten to know better of each other than before. On a hilarious note, Sofia has reportedly said “I think he has learned more about Colombians than what I have learned about Italians!”

Sofia has a very successful career as an actor and a model. Sofia was nominated for four Golden Globe Awards, four Primetime Emmy Awards, and seven Screen Actors Guild Awards. She is the 32nd most powerful woman in the World (according to Forbes). Other than her acting career,product endorsements and licensing deals and to her stunning net worth.

Both Sofia and her husband, Joe, are influential figures in Hollywood. In days to come, they will undoubtedly have each other’s back. Best wishes for Sofia Vergara’s career path ahead!