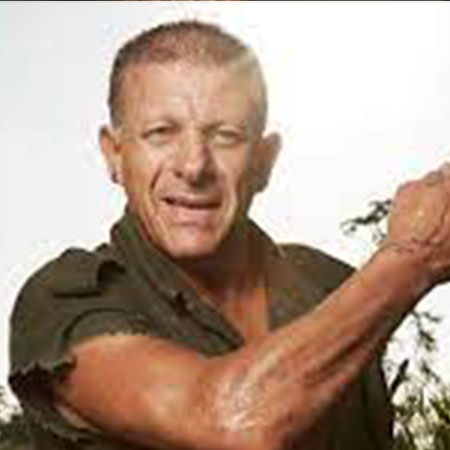 Shelby Stanga, an American swamp logger, and a reality TV star is popularly known as the Swamp man, He is best known for his appearance on the American reality series, Ax Men, which documents his life when he is not logging.

Shelby was born on July 31, 1956, in Bedico, Los Angeles. Shelby lived close to the swamps, creeks, and rivers from a young age.

So, naturally, he grew to be interested and attached to nature. He would rather spend the day in the swamps than go to school every day.  He dropped out of school at the age of nine and started his swamp journey in his early teens. Shelby, along with his cousins, taught themselves to survive with what was around them in their surroundings.

At the age of 16, Shelby went on to join a local dredging company, where he pulled his first valuable cypress tree from the Tangipahoa River. His quests mainly include trees, which were cut down for commercial purposes from the 1850s to the 1940s. The beautiful and colorful wood logs are sometimes as long as 100 feet and as wide as 7 feet.

Rick Yemm bio: His career and net worth!

When the Discovery Channel was looking for a guide for their show Man vs. Wild, Shelby’s name kept popping up after inquiring the locals. That’s how Shelby ended up becoming the guide for Bear Grylls and the production crew for an episode post-Katrina.

When a swamp moccasin was floating while shooting, there he bite the head off moccasin and that left the entire crew stunned. After the filming ended, words spread around in Hollywood about the crazy guy who lived in the swamps.

What is Deadliest Catch producer Thom Beers net worth 2018?

The first dragged the attention of Thom Beers, the producer of several hit reality series including Deadliest Catch, Storage Wars, and Ice Road Truckers. Following that, History Channel approached Shelby, but it took little time for him to accept the proposal. Later, in 2010, Shelby joined Ax Men in its third season. But being a simple man with straight-forward life, filming was not as easy as he thought. Cameras were on his face all the time, literally.

Even when he came out of the water after a dive, a camera would come right up his face. Obviously agitated by that, Shelby warned the cameraman to keep the camera out of his face or else he would shoot the camera out of his hand. And when the camera popped up the next time, that’s when a Ruger 44 Mag Blackhawk came up. From that incident onwards, there was no camera.

Of course, it wasn’t easy for the staff too. Shelby stressed the team from time to time doing crazy things like scaring them with a snake and all.

Despite all the struggles, the show successfully showed him recovering logs from 2000 years to 50000 years old. He stayed with the show until its fourth season.

He also appeared in its spin-off, The Legend of Shelby the Swamp Man, from August 6, 2013, to April 26, 2015. The show chronicled the day to day activities of Shelby.

In 2011, he dragged off a log for a mammoth $70,000, which he sold for National Zoo. In 2014, he was put behind bars for a day upon claims that he cut down his neighbor’s cypress tree three years ago.

As of 2018, Shelby is estimated to have a net worth of $800 thousand. Shelby would have already been a millionaire, if he had sold all the logs that he had been collecting since four decades. But the logs are like a safety deposit to him for the future.

Shelby has entertained people with his weird yet fun to watch pranks. Though many things are known about him, he is a bit coy when it comes to his personal life.

He is married to Donna Stanga, who is a devotee of Jehovah’s Witness. Other than that not much is exhibited about his beloved wife. As of now, the pair resides in their 3.5-acre house and property at the edge of Lake Pontchartrain.

An American swamp logger and reality TV star, Shelby Stanga, is best known for his appearance on the History reality series, Ax Men.

He dropped out of his school at the age of nine and started his swamp journey during his early teenage years.

At the age of 16, he went on to join in a local dredging company, where he first pulled off valuable cypress tree from the Tangipahoa River.

His quest mainly includes trees, which were cut down for commercial purposes from the 1850s to 1940s.

After History Channel approached him personally, he joined ‘Ax Men’ in the third season in 2010.

When he first appeared on the show, he had trouble filming the scene as he was not comfortable in front of camera.

The show showed him up recovering logs from 2000 years back to as old as 50000 years. He was the part of the show until its fourth season.

The show was based on the day to day activities of Shelby Stanga. He also appeared in an episode of ‘Man vs. Wild’ as a guide to Bear Grylls.

In 2014, Shelby was put behind bars for a day upon the claims that he cut down his neighbor’s cypress tree three years ago.

He is married to Donna Stanga, who is a devotee of Jehovah’s Witness.

The couple resides in their 3.5-acre house and property at the edge of Lake Pontchartrain.

Recovering valuable logs for four decades, Shelby would have been a millionaire if he had sold those logs. But, he has chosen to keep it safe for future use.