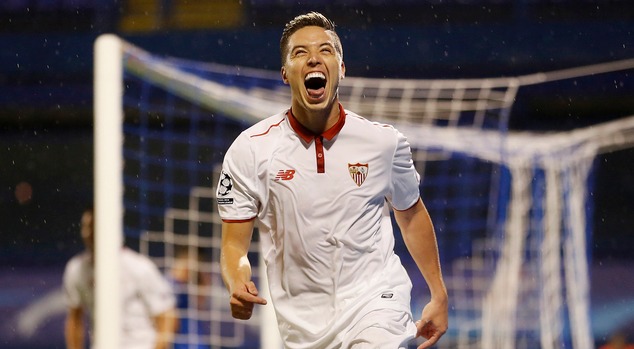 French International Samir Nasri’s loan move to the Spanish side Sevilla seems to have polished him and have brought the best out of him. Nasri after a frustrating two years at Etihad, finally, seems to have found his best form in Spain.

His new team Sevilla took a step closer to the Champions League last 16 after they overcame Croatian giants Dinamo Zagreb 1-0 in their Group H clash. Nasri who was brilliant for Sevilla scored the goal which his performance deserved.

The results mean Sevilla are now level on seven points with Italian powerhouse Juventus, who confirmed their place on top of the group with a 1-0 win against Lyon, on seven points. Sevilla who have accomplished hat-trick of title wins in Europa league will look to improve their performance in the Champions league this season.

Sevilla could easily have put 3 or 4 past the Croatian title favorites but they failed to make the most of the chances they created in the game. Manchester city misfit Nasri smashed home the winner in the 37th minute when he poked the ball from a tight angle after a low cross by teammate Mariano Ferreira.

Mariano, Luciano Vietto, and Franco Vasquez came close to score but the visitors were unable to find the back of the net. They were nearly punished for the inability to double their lead when 18-year-old Gordon Schildrnfeld nearly grabbed an equalizer for the hosts.

Other games on Tuesday night saw English champions and champions’ league debutants Leister City made it 3 out of 3 wins in group G as they beat Copenhagen 1-0, thanks to a goal from Riyad Mahrez.

The English side shocked the world when they lifted the premier league title in May and they could even make a bigger shock by lifting the Champions league crown in May 2017.

Staying in Group G Portuguese outfits Porto came from a goal down to claim a 2-1 victory against Club Brugge. Mexican defender Miguel Layun and inform Portuguese Midfielder Andre Silva completed the comeback for Porto. The win places Porto tied on 4 points with Copenhagen while Leister City lead the group with 9 points.

In other matches, English side Tottenham was held to a 0-0 draw by German outfits Bayern Leverkusen. Their goalless draw means Tottenham sit 2nd on the table with 4 points behind group leader Monaco, who have 5 points.