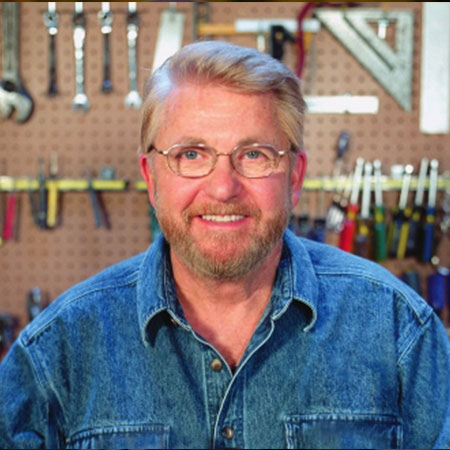 Ron Hazelton (born May 29, 1952) is a master craftsman, who is known as the leading man in the do-it-yourself home improvement field.

Growing up in his plastering contractor father’s shop, he developed an interest in home improvement skills from a very young age.

After college, he landed a management training job and later went to serve the US Navy for three and half years during Vietnam War.

He coined the concept of the on-location home improvement reality show, The House Doctor, in 1989.

The 200-episodes series, which he originally created, co-produced and hosted for KGO-TV in San Francisco, was later aired on HGTV.

In ‘Ron Hazelton’s HouseCalls,’ he performs how-to demonstrations that homeowners do as a part of DIY home improvement projects.

On the show, he offers step-by-step instructions so that homeowners with average DIY skills can complete the project correctly on the first try.

The half-hour nationally syndicated home improvement show, which first aired in the fall of 1999, is running in its 19th season.

Additionally, he hosted other History Channel programs, including ‘Modern Marvels’ and ‘Save Our History: Frontier Homes.’

The DIY guru has also offered his home renovating expertise on ‘The Oprah Winfrey Show’ and ‘Inside Edition.’

A longtime safety advocate, he is the national spokesperson for a non-profit fire safety organization, Home Fire Sprinkler Coalition.

He has authored a number of books, including Ron Hazelton’s HouseCalls: America’s Most Requested Home Improvement Projects.

He got married to Lynn Robin Drasin, a segment producer of Good Morning America, on October 19, 1997.

Now, the couple along with their two children reside in Fairfield, Connecticut.