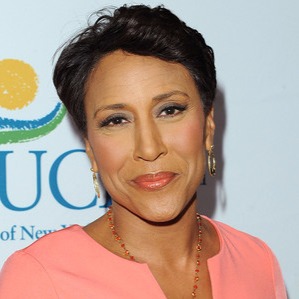 Roberts is a survivor of breast cancer and myelodysplastic syndrome. Diagnosed with the early phase of breast cancer in 2007, she underwent surgery and completed 8 chemotherapy sessions along with six and a half weeks of radiation treatments. Her career halted for several months from October 2012 to February 2013 when she had bone marrow transplant.

Talking about the love life of this talented journalist, she has been in a relationship with a massage therapist, Amber Laign since 2005. Acknowledged for having a same-sex relationship, she was named as one of the 31 Icons of 2015 LGBT history month by Equality Forum. She hadn’t discussed her sexual orientation in the media before she came out as a lesbian in 2014 on Good Morning America.

Filling in as a co-anchor of ABC morning news program in 2005, she has been associated with the channel till date. Credits of her high-profile also go to the ESPN’s show SportsCenter as well.

Who is Robin Roberts?

She followed her sister Sally-Ann’s footsteps regarding the career choice and started in 1983 as a reporter and sports anchor for WDAM-TV in Hattiesburg, Mississippi. In the year that followed, she worked for WLOX-TV and then for WSMV-TV in 1986. From 1988-1990, she served as a reporter and a sports anchor for WAGA-TV. Before joining ESPN in 1990, she explored several local stations. Through her 15 years tenure at ESPN, she became well known as the reporter of SportsCenter and her catchphrase Go On With your bad self!.

Another big break came in her career when she joined ABC News as a featured reporter for the immensely popular news program Good Morning America in 1995. She managed to work for both ESPN and ABC for several years and left ESPN to co-anchor GMA IN 2005. Since then, the proclaimed media figure is associated with the ABC News.