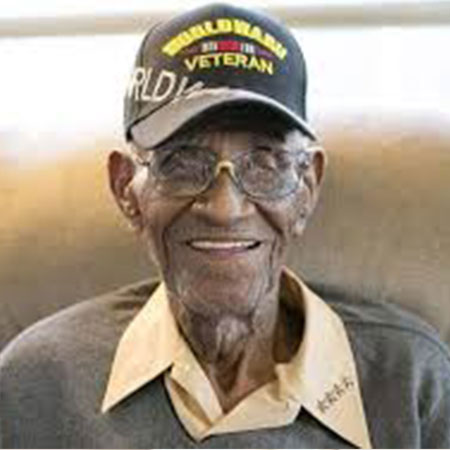 111-years-old Richard Arvin Overton is the oldest surviving U.S. war veteran and also the oldest living man in the US.

Richard was born on May 11, 1906, in Bastrop County, Texas, to Elizabeth Franklin Overton Waters and Gentry Overton, Sr.

He joined the US military on Sept. 3, 1940, and served in the South Pacific from 1940 until leaving as a technician fifth grade in October 1945.

Afterward, he worked at local furniture stores and later served at the Texas State Treasurer’s Office.

He was married twice but didn’t have any children. Now, he is alone as he has over lived all of his family members.

He has been staying at his home he built in Austin, Texas after the end of World War II in 1945.

He receives donations for his 24×7 care at his home from GoFundMe campaign, which his relatives founded in December 2016.

He earned high media attention in 2013 Memorial Day when he visited White House to meet President Barack Obama and also talked to Fox News about his life.

That same year he accepted a celebratory box of cigars from the President during a standing ovation at Veteran Day parade in Arlington.

He became oldest living War II veteran after Frank Levingston died at the age of 110 years, on May 3, 2016.

Here are some secrets Overton has shared about his long life.

The 111-year-old addresses ‘staying out of trouble’ as the key to living to this age.

He says that you will have to go when God wants you to go; otherwise, nothing can take away your life, even the bullets during the war.

The World War-II vet says that you don’t have to go back from your way, God will take care of you.

Driving is one of the things he loves to do. He got his license renewed in 2015 and still drives his truck, Ford F100 Custom.

He smokes 12 cigars a day and sometimes even more than that, but doesn’t inhale.

Overton mixes a tablespoonful of whiskey in the morning coffee which keeps his muscles tender.

He says that cigars and whiskey have somehow contributed to his longevity.

The lonely man has been accompanied by the pet cats in his house.

He has been drinking milk all his life, and it’s a surprising fact that eating ice-cream every night makes him feel happy.

The biggest secret he has shared is that he has been doing what makes him feel good his whole life.

We wish your sound health, Richard!