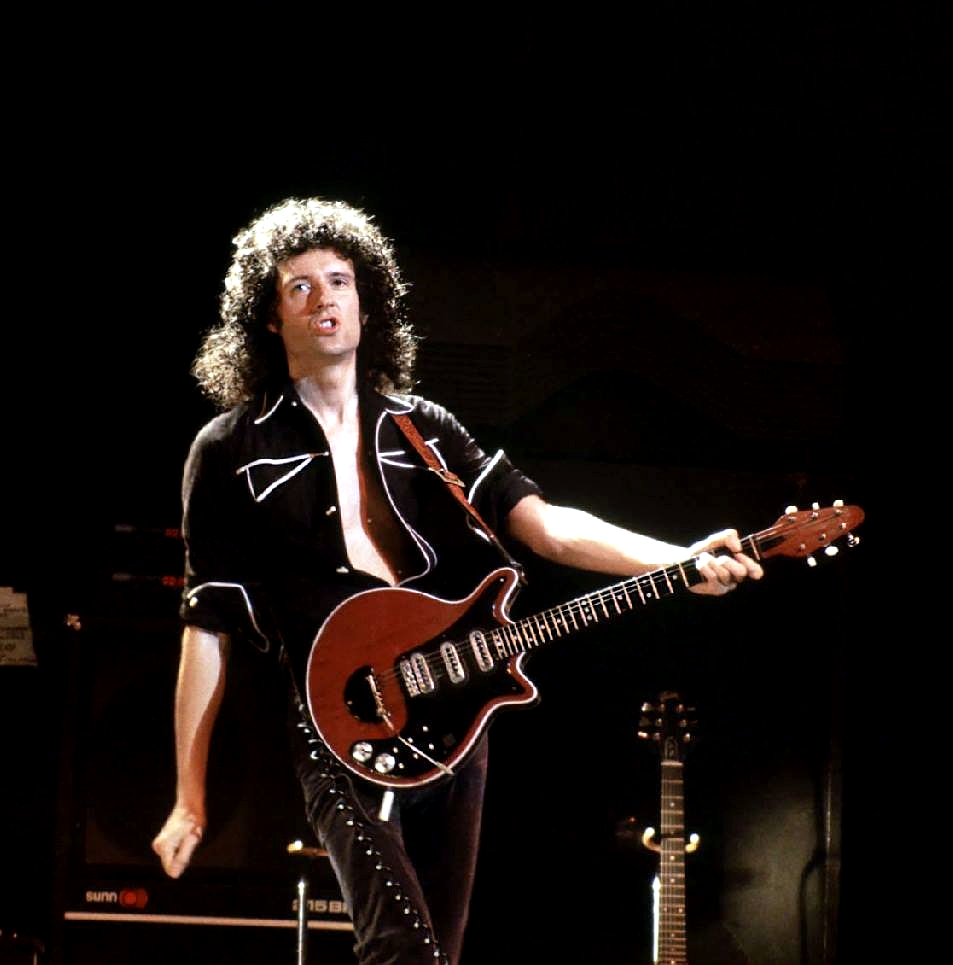 Brian May (born July 19, 1947), the lead guitarist and occasional singer of the rock band Queen, is undoubtedly one of the greatest guitarists in the world. Anyone fan of him may also be familiar with his signature piece, The Red Special, referred to as the “Fireplace” or the “Old Lady.”

Apart from the RS, he has also used plenty of other guitars, including Fenders, Gibsons and Les Pauls, during his glittering career. Today, we have a list of 10 guitars May has turned to.

It is Brian May’s most iconic guitar that he and his father designed and built while he was a teenager. He used the guitar throughout his Queens era. He has used the guitar on almost all Queen albums and live performances since the band’s formation in the early 70s.

Detailing its construction & history, he released a book, Brian May’s Red Special: The Story of the Home-Made Guitar that Rocked Queen and the World, on its 50th anniversary in 2014.

2. Brian May and his John Birch RS Special

It is the Red Special replica, made by John Birch in 1975 and used in the famous We Will Rock You music video. The guitar had the same pickups as the RS, but it didn’t sound like the original one, and he didn’t like it.

May used the guitar until he smashed it during a 1982 concert in the US and sent it to John Page. Page kept the guitar for over two decades and sent it back to May. Then, he had the guitar restored by Andrew Guyton and still owns it.

May started using the Flying V as a backup for his RS after he smashed up John Birch RS Replica in 1982. The guitar had a tobacco sunburst finish with white binding and two exposed humbuckers.

4. Brian May and his Gibson Les Paul Deluxe

May isn’t satisfied with any guitars other than his RS special. He started using Gibson Les Paul Deluxe during the 1974-75 tour. However, the guitar, which he used to replace the Stratocaster/Vox AC30 combo, disappointed him, and he ordered a John Birch replica as a backup.

May used this Telecaster to play the solo on Queen’s 1979 song; Crazy Little Thing Called Love. He performed with this guitar for the first time at the RDS Arena in Dublin on the Crazy Tour in November 1979.

It’s the main acoustic guitar used for studio recording and life. Brian owns a couple of them; Brian and Freddie played one each for Crazy Little Things Called Love. He also used the guitars on Love of my Life and ’39.’

He currently has a Guild 12-String as a replacement for the Ovation. Most notably, he used it while touring with Paul Rodgers in 2004.

8. Brian May and the 1950s Fender Stratocaster

9. Brian May and Hairfed Acoustic

May used this in his early days around the late 60s and early 70s. It was one of the very first acoustics he owned. Dave Dilloway, who played the bass in May’s first band, 1984, from 1964 to 1968, gave the guitar to May in exchange for his Egmond Student, the guitar he learned to play on.

You can see him using this guitar in Queen’s music video; It’s A Hard Life. It was made for him by a film prop company. Throughout the years, many replicas of his “Old Lady” have been built by professionals and amateurs. As of 2004, the commercial Red Special replicas are available at shop.brianmayguitars.co.uk.