Pregnant Alexa Vega and Carlos Pena unveiled the name of unborn. Married twice, why did she divorce her first husband? 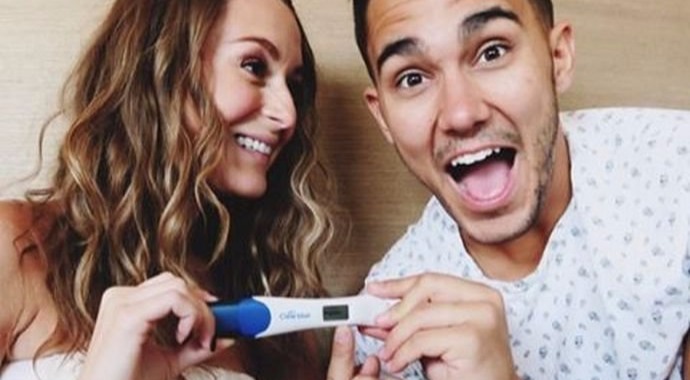 The Spy Kid actress and husband Carlos are likely to welcome their first child in the months ahead. And their excitement is already visible to everyone around them. On Sunday, the so in love couple shared the ultrasound picture of the child is expected to be a son.

The couple excitedly shared the name of the unborn through Instagram. The name that the couple is planning to give to their new boy is Ocean King Pena Vega. Explaining the reason behind giving this name Alex quoted: God called dry ground ‘land’ and the water the ‘seas’. This is why we went with Ocean, and he is the son of the one true ‘king’.

Besides, the name also carries a beautiful biblical meaning for the Pena-Vega family. The two love birds seem much excited by the prospect of raising their child. The couple’s social accounts are filled with them taking snaps of their pregnancy.

I cannot believe I finally get to say this… WE’RE PREGNANT!!! It’s #ClearblueConfirmed that a little blessing is joining the PenaVega family!!! We can’t wait!!! #ItsHappening #HolyWow #LosForDaddyOfTheYear #ClearbluePartner

For Alexa Vega, this is her second marriage. Married to a film producer, Sean Covel, in October 2010, the duo divorced in 2012. The official date of their separation had been given as March 5, which means that the pair had already parted ways before filing for a divorce four months later.

Happy first #FathersDay to this incredible man right here. You make everyone smile and are a light to everyone you meet. You are going to be the most amazing daddy. I love you my angel! #Blessing #dorks #IamTotallyDoingACreepyStare #CantGetEnoughOfYou

Their marriage never had an indication of unhappiness or anything like that. It came as a surprise when the news of them getting divorce emerged. And surprisingly, neither Alexa nor Sean had anything bad to say about their relation or about each other post-divorce.

Happy Birthday to the man I want to spend every adventure with. You have a heart for the Kingdom and are such a beautiful light in this world! You make everywhere you go better… Your smile… Your love… Your faith… Your strength… Your dorkiness… You hold nothing back. You are an amazing leader… A wonderful husband and will be an incredible father 🙂 Here is to a whole new adventure together. I love you my angel. @therealcarlospena #27

Alexa Vega, now 27, finally seems to be getting all the joy from marriage. After an unsuccessful first marriage, Alexa had really made her second marriage with Nickelodeon star Carlos Pena a fruitful one. Awaiting the arrival of their first child, the duo has already named the unborn baby as Ocean King Pena Vega.

Alexa Vega is pregnant for the first time with her husband of almost 2 years, Carlos Pena. In a picture that Alex posted on her Instagram account, the two happy couple unveiled the gender and the name of the unborn. After the agony of broken marriage previously, Alexa is finally getting the best out of life.