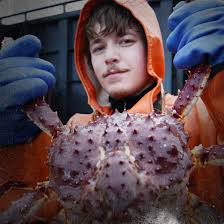 Phillip Hillstrand is an American reality star mainly known for his appearance on the hit documentary television series, Deadliest Catch, which airs on Discovery Channel. He serves as a deckhand for the fishing vessel Time Bandit on the show.

Born to an engineer, Neal and Sugayle Hillstrand in 1988, Phillip is the youngest blood in the long lineage of the Hillstrand family. He resides in the city of Anchor Point, Alaska, along with his brother Axel, and sister Marissa.

Phillip acquired his primary education from Service High School located in Anchorage, Alaska, from where he graduated in 2006. He is an apprentice in the Hillstrand family trade of crab fishing. Besides fishing, he is also fond of surfing, hockey, football, baseball, and rock music.

Phillip used to accompany his father, Neal on most of his fishing trips. With that going, he started working as a deckhand from the very young age on the Time Bandit, which was owned and designed by his grandfather John Hillstrand Sr.

Though he was into fishing and boating for a long time, he made his debut appearance on the documentary series, Deadliest Catch, in 2015. The show revolves around the Hillstrand brothers as they fish crabs on the Bering Sea.

Later in 2016, he appeared on various renditions of the show Deadliest Catch: The Bait and Deadliest Catch: A season in Hell, where he made few cameo appearances. Known by the name Greenhorn of Time Bandit in the show, Phillip became quite popular among the crew of the ship in no time.

Deadliest Catch Axel Hillstrand: Details on his career and bio

The FV Time Bandit is manned by the three Hillstrand brothers Johnathan, Andy, and  Phillip’s father, Neal, who also serves as the engineer of the ship. The eldest brother Johnathan carries the helm as the captain during King Crab and Bairdi season while Andy takes the helm during Opilio season. Phillip and his brother Alex are mostly seen helping out their dad and uncles around the vessel.

Captain Jonathan Hillstrand journey in Deadliest Catch’. More on his Net Worth 2018

Phillip’s season was cut short in 2016, due to a hand injury he attained while managing the bait station. His right hand was crushed when it got under the launcher of the ship leading to such a gruesome injury.

He returned last year, to prove everyone that unfortunate circumstances sidelined him and he has what it takes to carry on the family legacy. Even though his hand has recovered up to estimated 90%, he’s worried about not being able to match up with the rest of the young crew.

Whilst there being no accurate description of Phillip’s net worth, the combined balance of the Hillstrand family is estimated to be around $13.2 million. One can assume that Phillip also has a say in such amount. As of 2018, Phillip is seen busy filming for another season of Deadliest Catch along with his brother and uncles.

Phillip currently is in a relationship with Jesse Gibbons. The pair first met in 2011, and as of his Facebook relationship status, they are together since February 14, 2012. Gibbons studied veterinary at Kaplan college, Phoenix Arizona. Though he has not revealed much about his girlfriend on social sites, his love for dog is transparent on Instagram and Facebook post.