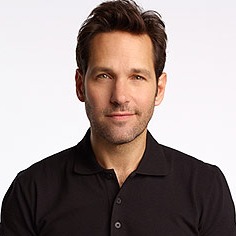 Paul Rudd is popular as the superhero Scott Lang of the 2015 commercial blockbuster Ant-Man. Paul has starred in over 45 movies and makes notable appearances in Television shows and theater presentations. He is the 2,554th recipient of a star on the Hollywood Walk of Fame.

Paul was born on April 6, 1969 in New Jersey. Paul attended the Broadmoor Junior High and the Shawnee Mission West High School. He then majored in theater at the University of Kansas,. In addition, he attended the American Academy of Dramatic Art, Los Angeles and the British American Drama Academy, Oxford.

Paul started his acting career in 1992 by playing Kirby Quimby Philby in “Sisters”. In 1995, he secured himself a major supporting role in “Clueless". He then debuted for Halloween: The Curse of Michael Myers, The Cider House Rules and William Shakespeare's Romeo + Juliet among others.

Paul has landed himself at successful lead roles since 2000. He has starred in commercial successes like “Night at the Museum”, “I Love You, Man”, “Anchorman 2: The Legend Continues”, “Ant-Man” and “Captain America: Civil War”. Paul has had seven wins and 19 nominations, the latest win being 2015 CinemaCon Award for Male Star of the Year. In 2015, Paul was rewarded with a star atthe Hollywood Walk of Fame.

Apart from the movies, Paul has appeared in few Broadway productions – “Grace” by Craig Wright, “Three Days of Rain” by Richard Greenberg, “Twelfth Night” and “The Last Night of Ballyhoo”. He has made guest appearances on television shows like Friends, Tim and Eric and Parks and Recreation. He has also hosted the Saturday Night Live.

Paul was born in New Jersey to father Michael and mother Gloria Rudd. Paul’s parents are originally from the UK. He was born Jewish. He has a sibling named Julie Rudd.

Paul has an estimated net worth of $25 million. Paul endorses products of the Samsung brand. In addition, he is actively engaged with the Adrienne Shelly Foundation and the American Cancer Society. These charities work for incredible causes like the Cancer, Health and the Creative Arts.

The extremely popular actor is apparently not very fond of the social media sites. We bet that he has millions of fans who are anxious to connect with him through Instagram and Twitter!