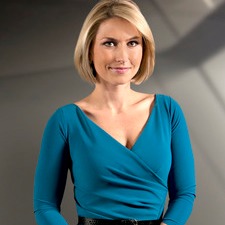 Morgan Brennan, the general assignment reporter at CNBC, recently welcomed a child, a baby girl on 30th March 2016. Brennan’s husband Matt Cacciotti whom she has been married to since 2011, is a self-employed man who has once worked for the New York Mercantile Exchange. At present, both Morgan and hubby Matt is enjoying happy moments with their newly born baby.

Morgan dated Matt for a couple of years before finally getting wed on 6th August 2011. Their wedding ceremony was celebrated organizing a small function where only their close friends and family members were present.

The registration card of their wedding was revealed which clearly specified that they had tied the knot with each other on 6th of August 2011.

Morgan has kept her wedding details a secret. As the marriage ceremony was conducted privately, she has not even shared any pictures of her wedding on the social media sites.

The couple is still pouring the same love for each other since they got hitched in 2011. It’s been quite a long time that they exchanged their wedding vows and still the love between them has not changed a bit.

Lovely duo Matt and Morgan’s happiness became bigger when they were blessed with a baby girl, recently, on 30th March 2016. As the little footstep of the angel entered their house, they seemed to be extremely cheerful than before.

A few months back, before the delivery period, Morgan shared the baby shower picture through Instagram. She even revealed due delivery date through opening the baby registry in Pottery Barn Kids.

#babyshower for the #babydaddy. Thank you, Mo aka “Maid of Honor” @mohamedhussain

The baby was coincidentally born according to the baby registry which was registered as on 30th March.

Brennan’s hubby Matt Cacciotti has not come openly in front of the media. But going through his Facebook, it is revealed that he is a self-employed man. He has once worked for the New York Mercantile Exchange.

Opposite to hubby Matt, Morgan has been one of the prominent media figures. She is mostly recognized for working as the general assignment reporter for CNBC network.

On 18th August, 2016, she took an interview with NASA Astronaut, Rick Mastracchio. She thanked him for giving an interview through sharing a post on her Twitter.

Thanks for the interview @AstroRM. So much more “entertaining” than the Martian. My hat goes off to you pic.twitter.com/j1s6G6hAAJ

Brennan initiated working for CNBC in 2013 and she is still associated with the network. During her reporting career, she has interviewed a few of the many renowned billionaires, CEOs of multibillion-dollar companies, and head of the state.

Well! Morgan is currently enjoying happy moments with spouse Matt Cacciotti. The experience of parenthood for the first time with the birth of their first baby girl has added more happiness into their lives.

Many congratulations to Morgan Brennan and Matt Cacciotti for their newly born baby!!!