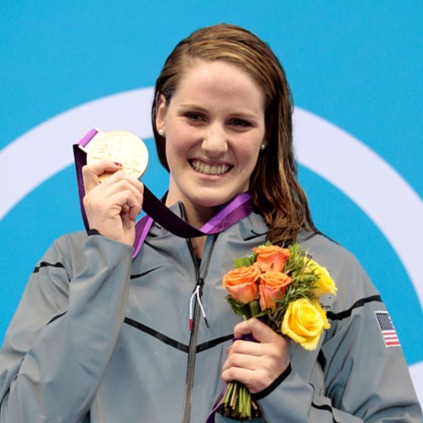 Missy Franklin is a world famous American competition swimmer. She has added to America’s pride by winning four Olympic gold medals throughout her career so far.

Born on 10th May1995 Missy Franklin started swimming at a very early age. She joined Colorado Stars travel swim team at age 7. By reaching the age of 12, Franklin began competing against the girls who are much older than her.

Missy participated in 2008 U.S. Olympic Team Trials when she was just age 12 years old. However, she didn’t qualify in her first attempt at 2008 Summer Olympics. In 2010, she competed at National Championships and became qualified to swim at 2010 Pan Pacific Swimming Championships. She finished at 2nd place in 100-meters and 200-meters backstroke.

Missy won her first international medals while competing at 2010 FINA Short Course World Championships. She also earned a silver medal in 4X100 meter medley relay. The amazing performance she made in her field earned her an award at 7th annual Golden Goggle Awards for Breakout Performer of the Year.

The year 2011 turned out as the best year of her career as she grabbed the total of 5 medals including 3 gold, 1 silver and 1 bronze. That same year, she was named the Female Athlete of the Year and Female Race of the Year. She also earned Relay Performance of the Year Award at 8th Annual Golden Goggle Awards.

In the way of giving continuity to her successful career, she qualified to swim in the four individual events at 2012 Summer Olympics. While competing in 200-meter backstroke final, she finished in the 1st place, setting the time of 2:06:12.

Missy won the bronze medal in 4×100 meter freestyle relay on her first day of swimming competition at 2012 Olympics that held in London. She won the gold medal while competing in 100-meter backstroke, finishing at 58.33 seconds. She also won her 2nd gold of Olympics, holding the world record time 2:04:06.

For her amazing journey in 2012, she was named as the best female swimmer by FINA Aquatics World Magazine. Franklin even continued her good form in other world championship events. While competing at 2015 World Aquatics Championship, she won the bronze medal as themember of U.S. team in 4X100 meter freestyle relay.

Missy Franklin was born to parents Dick Franklin and D.A. Franklin. She is the only child to them.

Franklin was romantically linked with an American swimmer Ryan Lochte in the past. Media started to gossip about their relation when they were captured together at London’s Aquatic Center. It might be just a rumor as there is no confirmation has been made by either of them. As of now, Missy Franklin is single.

Missy Franklin is just 21 years old but her long run association with sports has already her a hefty net worth of $3 million. Her brand endorsement with Speedo has also contributed to her net worth.