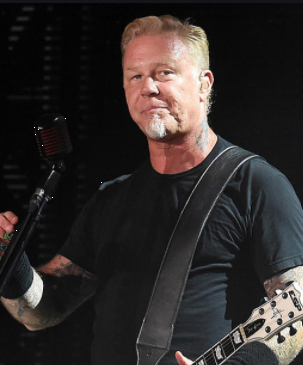 James Alan Hetfield, who was born on August 3, 1963, in Downey, California, is the co-founder, rhythm guitarist, and lead vocalist for Metallica.

The band was formed in October 1981, after James answered a classified advertisement by drummer Lars Ulrich.

A British author, Joel McIver ranked James on number 8 in his book, “The 100 Greatest Metal Guitarist.”

Here are the guitars that the guitarist has collected or used over the years of his musical career.

James bought his first guitar from a friend from high school who played with him in the school’s Jazz band.

His mother helped him with the payment of $200. He used the guitar to write some of his early songs and even played in high school bands.

He bought his second electric guitar in 1980 for an amount of $200 and played it in Metallica’s first album, Kill ‘em All.

The guitar’s neck snapped in 1984, following an accident on stage, but before recording ‘Death Magnetic’ in 2008, James decided to restore the guitar.

He replaced its pickups with the EMG 81/60 set and replaced the headstock, which was broken more than once in the past.

After the Electra Flying V accident in 1984, James started using different guitars, and this white 1984 Gibson explorer with a sticker “So What” became his main guitar.

The guitar was originally equipped with Gibson Dirty Finger pickups, which he used to record large portion of the album, Ride the Lightning.

James later replaced the pickups with EMG 81/60 set in the late 1980s, which he used in ‘EP: Garage Days Re-revisited’ and ‘…And Justice for All.’

When the Jackson company met James for the first time, they wanted him to endorse their guitars, which he denied initially.

He later made his decision known by placing a sticker saying “Kill Bon Jovi” over the guitar’s original logo on the headstock.

He used the guitar during the recording of ‘Master of Puppets’ in 1985 and during the Metallica Damage Inc tour.

In 1987, he replaced its pickups with EMG 81/60 set but after a few months its neck snapped, and James didn’t bother repairing it.

This was James’ first ESP and one of his most recognizable guitars. He bought it before recording ‘And Justice for All.’

It has the usual setup of EMG 81/60; one of the necks consists of 12 string and the other one contains the regular 6 string.

Thank you for watching the video. Let us know which one of these guitars you liked the most in the comments below.