Seven years of Wedding, Melissa Rycroft and her Husband Tye welcomed their third baby. Is she Pregnant Again? 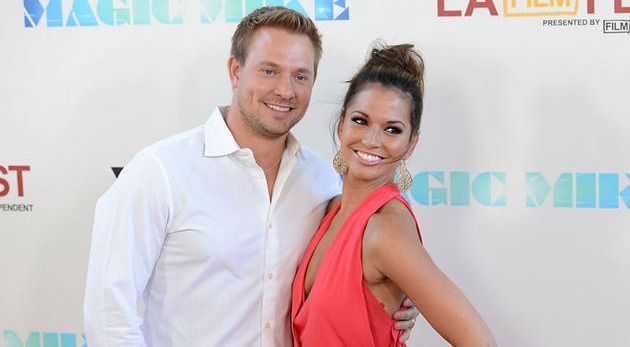 Melissa Rycroft and her husband Tye Strickland have got each other’s back for seven years since marrying in 2009. The couple recently welcomed the new baby, to complete their family. Now, the parents of three adorable children, the couple is getting the best out of their marriage.

Melissa Rycroft and Tye Strickland have encountered lots of ups and downs in the process of establishing a stable relation. First met in 2005, the duo got into a relation which lacked any pace to hit the long run.

Melissa joined the TV reality show The Bachelor in its 13th season after she faced the agony of a breakup with Tye. She found a new love in Jason Mesnick, while she was on The Bachelor.

Melissa and Jason were so much in love that they even got engaged and were in line to marry. But things went from exciting to humiliating for Melissa when Jason dumped her in live TV.

That humiliating break up took Melissa back to Tye Strickland with whom she married in December 2009.

Now celebrating a glorious and a successful seven years of marriage, the couple seems far away from a divorce as they seem really satisfied with their family life.

A glimpse into the happy family life: Melissa Rycroft’s life is exciting with three children

Further excitement and joy were added to Melissa’s family when they recently welcomed a new member. Melissa gave birth to her 3rd child on 18th of May 2016, without any health complication. The couple is now proud parents of their three children – daughter Ava Grace Strickland, son Beckett Thomas Strickland and their newborn son Cayson Jack Strickland.

My happy campers this morning pic.twitter.com/BgrKqtHOcX

The arrival of their new son seems to have completed the family. Having welcomed a newborn just a few months ago, Melissa and Tye does not seem to have any plans to expand their family in near future. The 33 years old former Dancing with the Stars artist is probably very happy with her current family.

Rycroft has lived the glorious seven years of marriage with her with husband Tye Strickland. The journey has been made more exciting by the birth of their 3 adorable children. With a loving husband on one side and three angels on the other, Melissa Rycroft's marriage seems stable and her family life seems fruitful.