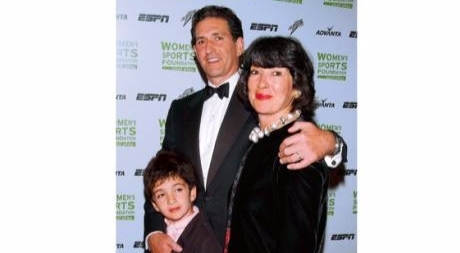 “My proudest lifetime achievement is my son and my family”

As said by Christiane Amanpour, a woman who has over 40-lifetime achievements, some of which are the highest degree of recognition, under her belt for her exceptional contribution to Journalism.

At the peak of her career, Amanpour was an unstoppable force, and so strong was her will to climb higher peaks in her career that she put off the idea of settling. That is until around the 1990s when she decided she was ready to embark on the possibility of romance and family. Just six months after, she met her husband, James Rubin with whom she is blissfully married with till date.

James Rubin, a former diplomat, used to be the US Assistant Secretary of State during the Clinton administration. Currently, he is working on a book. Together, Rubin and Amanpour have been married for 18 years and they have a son.

Their son, Darius John Rubin was born on 27 March 2000. Darius is a Persian name and also name of one of the historical kings of Iran. Darius’s middle name ‘John’ was after John Kennedy Jr. who was a good friend of both Amanpour and her husband. Darius is now 16 years old of age.

Still driven to continue in her relentless mission, Amanpour admits that she wasn’t prepared to let pregnancy get in the way. She joked about taking her infant child with her to the field and dressing him up with Kevlar diapers. However, all of that changed the moment she saw her newborn baby, Darius.

“There’s a love inside you that you never knew existed. There’s a protectiveness you never knew you were capable of. And there’s no way in hell I would take my child to the places I go.”

Unfortunately for Amanpour, 9/11 happened soon after her son was born. This led to her having to spend a lot of time away from her 18 months old son. Her husband whom she regards as a true hero took over the role of looking after their son. She recalled that had her husband also been busy with work, she would have to give her job up for her son.

To make time for her son, Amanpour makes sure to spend no more than 2 weeks away from him. Her husband also spends a lot of time with Darius as he has now quit his job to work on other projects.

“I never like leaving my son Darius for anything, ever. It is very difficult and painful for me… Darius thinks it is cool to have a mum like this, but sometimes he wishes so many people would not pay so much attention to his mother.”

She also added after entering motherhood, it has become more difficult for her to witness torture towards children.

“I’m always moved by the plight of children because they’re so defenceless. When I became a mother, it was a thousand times more emotional for me. I cry when I go into hospitals and see children.”

Amanpour is lucky to have survived all the ordeals she put herself through in order to shine a light on the horrors occurring all over the world. On top of that, she is luckier to have a beautiful son and an understanding and supportive husband.

For her future plans, she does not wish to have any more children but instead wants to further her goals of expanding the power of mass media for the greater good.