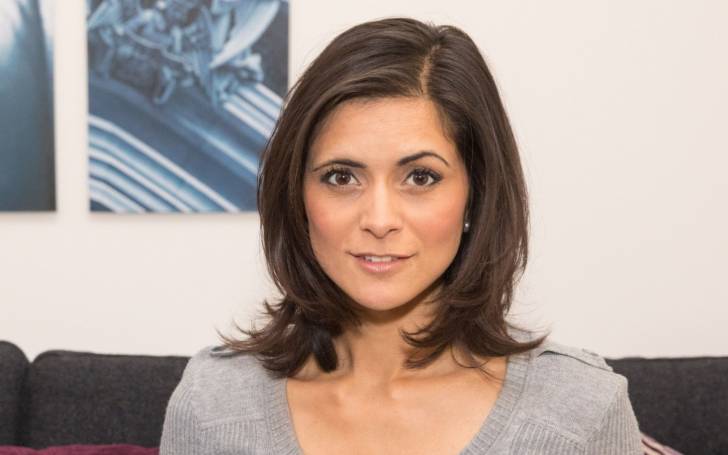 Lucy Verasamy is a frontwoman who calls herself a highly successful meteorological forecaster. She is famous as a British weather forecaster for sky news.

Currently, she is working for ITV Weather, ITV Racing, and ITV’s Good Morning Britain. Moreover, Verasamy earned herself a massive amount of wealth.

Verasamy holds the English nationality and belongs to the white ethnicity. She celebrated her birthday in 1980 on August 2 to English parents in King’s Lynn, Norfolk, England, United Kingdom. Her parent’s history is unknown as she respects her privacy about her parents.

Lucy completed her degree in BSC (Hons) level in Geography from Brunel University in 2001. She is also a student of three different schools. At first, she went to Silfield Primary School, and another is King’s Lynn, Norfolk, Framlingham College Junior School in Suffolk, and the third one is King’s Edward vii School in King’s Lynn, where she read A-Level Geography.

Forty-one-year-old Lucy had a keen interest in chasing her career as Weather Forecaster. In 2001, after her graduation, she started working for SKY Weather Center at Press Association’s(Europe’s Largest private weather company), writing forecasts for newspapers, radio, and TV. What’s more, she worked as a regular weather presenter for the Sky News breakfast program Sunrise.

Lucy joined ITV Breakfast as a weather forecaster for the Daybreak program newly launched. On August 2, 2012, she left the show and worked for the ITV at the national weather forecaster. Furthermore, Lucy moved to the ITV Racing Program weather expert. In 2017, she became part of Good Morning Britain in August as a relief weather presenter.

In addition, in 2019, Lucy worked for M&S Fresh Market Promotions. How To Spend It Well Holiday was a new ITV Travel show co-presented by Lucy and Phillip Schofield. The TV show pulled it due to the Coronavirus in 2020 March. In November, Lucy Introduced herself to TV’s digital series Climate Crisis: Our Changing World, with Laura Tobin and Alex Beresford, ITV weather presenters.

Lucy is hard and passionate about her work. It seems that she is not dating anyone at the moment. The details are not revealed about her past affairs, but Lucy can speak two languages like German and her mother tongue English. Lucy remains relatively reserved regarding her personal life as she respects her privacy and is very little known about her.

Lucy earned her wealth by working as a TV presenter with a tremendous amount of money as her salary. According to the sources, the weather forecaster Lucy has an estimated net worth of $500,000. She earns an annual salary of around $60,000.