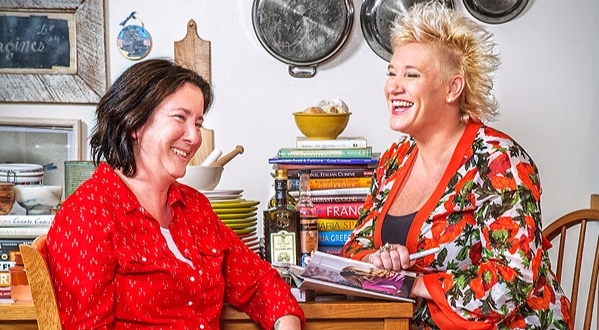 Koren Grieveson & chef Anne Burrell have been in a relationship for a long time now. The two, who exchanged their engagement rings in 2012, enjoy their blissful moments together. The two, however, do not seem to be tying the knot any time soon.

When did Anne Burrell come out as a lesbian?

People hide their perception of something just because of the fear of being judged, but TV chef Anne didn’t care about what people would think. Burrell proudly announced her sexuality. Anne’s open statement on being lesbian to the New York Post surprised many in 2012 when radio personality Ted Allen talked about her sexuality.

Ted Allen said, “Her significant other is a very private woman. They have been together for a couple of years and spent a lot of time together. It is no secret in the culinary world”. And later, Anne herself confirmed to the New York Post, stating that she is lesbian & is proud of having a girlfriend like Koren Grieveson for a couple of years.

When is Anne Burrell planning to marry her to-be wife, Koren Grieveson?

It was December 2012 when Anne revealed on Twitter that she engaged with the love of her life Koren Grieveson. Since then, Anne has regularly shared pictures with her partner on social media. Now, it’s been over five years of their engagement, and everyone is curious about knowing when the power couple will be getting married.

The versatile persona prefers not to mix her professional and personal life. Moreover, she has managed to take both hands in hands. As a celebrity, Anne has always been open about her lesbian demeanor, and that surely has turned out to be a motivation for many gay and lesbian people.