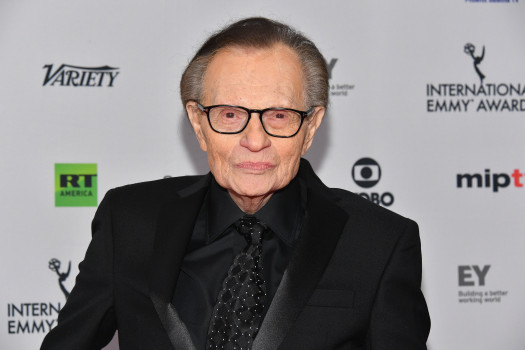 The American television and radio host, Larry King, filed a divorce from his seventh wife, Shawn King, after being together for 22 years on August 20, 2019.

Shawn King was his seventh wife but his eighth marriage. The 85-year-old has been married to 7 different women and has five children. Now that Larry has already filed for divorce from his seventh wife let’s check his marriage timeline and relationship history.

Larry was first married to his high school sweetheart, Freda Miller, in 1952 at the age of 19. The couple separated the following year on the demand of their parents, who did not support the marriage. In 1953, they annulled their marriage.

After having his parents annul his first marriage, the host got married for the second time to Annette Kay in 1961. They got divorced the same year. Later that November, she gave birth to a baby boy and named him Larry King Jr.

Larry did not acknowledge his child until Annette, who was dying of lung cancer, contacted him to tell him that the boy was his.

The third Mrs King was a Playboy Model, Alene Akins. The two first married in 1961, and Larry adopted her son Andy in 1962. King and Alene divorced the following year.

In 1968, he remarried Akins after divorcing Mary Francis Sutphin (his fourth wife). The following year the couple had a daughter, Chaia and got divorced for the second time in 1972.

In 1964, Larry married Mary Francis “Mickey” Sutphin. She gave birth to their daughter, Kelly. After two years, Mary and King got divorced.

On September 25, 1976, Larry married his fifth wife, Sharon Lepore. Sharon was a mathematics teacher and a production assistant. The couple got divorced in 1983.

Larry met his sixth wife, Julie Alexander, in 1989 and proposed to the businesswoman on their first date on August 1 of that same year. Furthermore, Julie and Larry married in Washington on October 7, 1989. Although a married couple, they both lived in different cities, Alexander in Philadelphia and King in Washington D.C. They separated in 1990 and divorced two years later.

The longest and the most successful marriage of Larry King was with his seventh Shawn King. Besides, the couple’s married for 22 years.

Days before, King underwent heart surgery to clear a clogged blood vessel. He married the singer, actress and TV host Shawn Ora Engemann in 1997 in his LA hospital room. The couple shares two sons, Shawn, 20 and Cannon, 19. Even after being married for 22 years, the couple did not have a happy relationship.

In 2016, Larry’s current wife, Shawn, alleged having a year-long affair with the American media personality, journalist and author Richard Greene. In April 2019, Larry suffered from angina and underwent an angioplasty. After being placed in the cardiac intensive care unit, the television legend was shaken and realised that he hadn’t been happy for a long time.

On August 20, 2019, King filed for divorce from his seventh wife, citing irreconcilable differences. Shawn did not respond to the divorce immediately as she became blindsided by it. It isn’t the first time the couple tried pulling the plug. In 2010, Larry had filed for divorce after Shawn had an affair with one of their son’s baseball coaches, Hector Penate. Hector admitted to the affair, but the couple decided to stay married.

Do you think the couple will reconcile again? Or will there be an eighth Mrs King?