Skip to content
Home » Entertainment » GMA anchor Lara Spencer has a great bikini body even at late 40s. Details on her surgery

GMA anchor Lara Spencer has a great bikini body even at late 40s. Details on her surgery 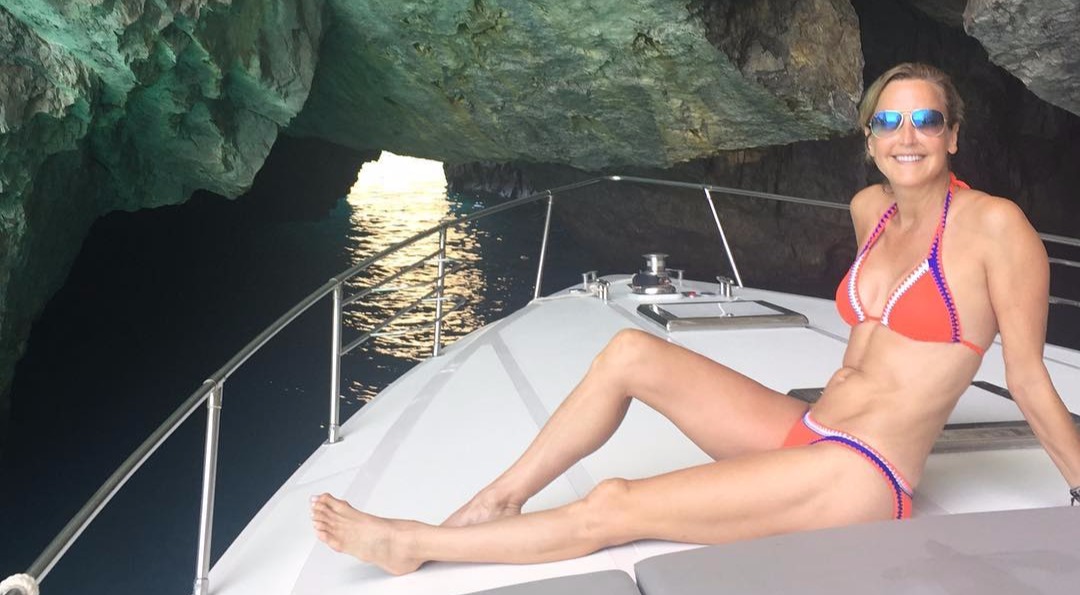 Lara Spencer is 47 years old and looks nothing like her age. The mother of two children has maintained a great bikini body. The health and fitness-conscious GMA anchor performs daily exercises and follows healthy diet schedules to stay in shape.

Lara Spencer is an athletic woman.

Lara, who attended Pennsylvania University on a full scholarship for springboard and platform diving, was named All-American athlete in her senior year.

Swimming has been her passion since an early age. She says that it allows her to get into a meditative state. She often does paddle boarding, which becomes an incredible workout for her arms and core.

Tennis is her favorite game. Furthermore, she is on a United States Tennis Association team and has earned 4.0 ratings. She says she would play it every day and wishes she knew about it as a kid.

Sara plays tennis with her son Duff almost every day. It has been a great family activity and a way to unwind for her. She also loves playing on the trampoline with her children. Her three pet dogs, Harry, Dandy, and Coco, have added reasons to her fitness as she enjoys running around with them.

Lara Spencer has a new boyfriend after an amicable divorce

How has Lara Spencer maintained such a great body measurement?

Lara has been an avid yoga practitioner. She does yoga 2-3 days a week. However, it becomes her everyday routine during the cold months.

Her moderate eating habits have helped her a lot in staying in shape. She prefers fresh veggies and clean foods like broccoli, kale, strawberries, blueberries, and spinach.

Just because I was always in great shape, doesn’t mean I can rest on my laurels. Life is precious, and our bodies need to be cared for every day.

Drinking a lot of water has protected her skin. Her early morning job has also created a positive impact on her health. Early to bed and early to rise have been a part of her daily routine. “It’s not easy but the key in creating a schedule: going to bed at the same time, and waking up at the same time. It’s not the ideal schedule, but at least it allows your body to get into some kind of rhythm”, she says.

The 5 feet 6 inches tall lady has perfect body measurements of 36-26-36 inches. Her involvement in sports has been a great workout for her. Likewise, eating healthy and exercising became the key to her curvy figure.

Lara underwent surgery to get her right hip replaced in August 2016. She announced on Good Morning America that she had hip dysplasia, a condition that causes deformation of the hip joint. After visiting a doctor for help with the chronic pain, she learned that she needed to have her hip replaced.

It has been said that her active lifestyle and regular involvement in sports caused the health issue. She waited a long time to visit a doctor and continued playing tennis through the pain, which worsened her condition. Eventually, she got convinced to go through the operation after the doctor warned her that she might have knee and back problems.

‘I’m terrified. It was so upsetting. I waited for a long time before I did anything about it or told anyone because it sounds like it’s an old person’s problem, and I just couldn’t believe it”, said Lara while discussing the surgery.

After surgery, she regularly visited a physical therapist to regain mobility and walked almost a mile every day. She said, “I ride the bike and do loads of exercises.” She returned to GMA a month later.