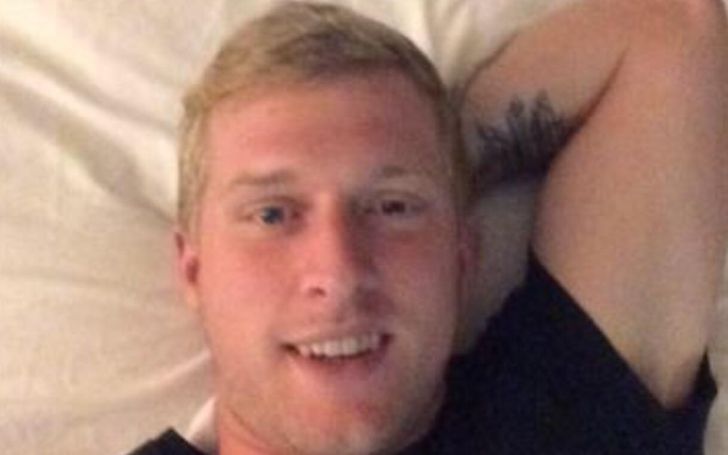 Kyle Chrisley is an American actor and TV personality. In addition, he also had a music career. Besides, he appeared on his father’s reality TV series Chrisley Knows Best. But, after the first season of the said reality TV show, Kyle left the spotlight.

Chrisley struggled with substance abuse. In addition, he and his elder sister, Lindsie Chrisley, do not have the best relationship with their father. However, both the Chrisley siblings seem to have moved on from the family drama and currently live in peace.

How old is Kyle Chrisley?

Kyle Chrisley is 30 years old and the eldest son of his father. The oldest son of Todd Chrisley was born on August 29, 1991. In addition, he recently celebrated his 31st birthday in August 2022. Likewise, Chrisley was born in South Carolina, USA. Thus, Kyle holds an American nationality, and he comes from white ethnicity.

Kyle was born to Todd Chrisley (father) and Teresa Terry (mother). He has an older sister named Lindsie Chrisley. In addition, Kyle has five step-siblings from his father’s second marriage.

Although Kyle came to the spotlight as a reality star, much about his early life remains a complete mystery to his fans. Likewise, the schools and colleges the celebrity child went to stay hidden for now. However, the drama between Kyle and his father, Todd, became rather public.

It is no surprise that Kyle does not have the best relationship with his father. His father, Todd, did weekly drug tests on him. In addition, Todd invested a lot of money in rehab for his son.

Kyle even went on to bash his dad in many interviews in the 2010s. Most notably, the reality star’s interview with the Daily Mail in 2014 raised many eyebrows all over the country. But later, in 2019, the father and son started to repair their relationship.

And Kyle even took to social media and stated everything he said in the interview was nothing but lies. Furthermore, Chrisley also stated that his biological mother and sister egged him on to put Todd behind bars. Likewise, Kyle also said that his drug addiction clouded his judgment at the time.

Kyle Chrisley is married to Ashleigh Nelson. Furthermore, the pair began dating in 2019. What’s more, Kyle proposed to Ashleigh in his house on February 14, 2021, and the following month the couple exchanged their vows away from the public. Moreover, the couple, Chrisley and Nelson, tied the knot in an intimate setting in Florida on March 30, 2021.

It is unclear how Chrisley and Nelson met. Whatsmore, the couple does not have any children together. However, Kyle has a daughter named Chloe Chrisley from a past relationship. Likewise, Ashleigh also welcomed a child from her previous fling.

Chole’s mother’s name is Angela Victoria Johnson. Victoria worked as a nurse and became famous when she started dating Kyle. However, not much information is available on their relationship. Likewise, after Angela and Kyle ended their relationship, Chrisley’s ex-girlfriend slowly faded from the limelight.

Ashleigh and Kyle remain blissfully married. Moreover, in a recent Instagram post, the reality star/musician stated that his wife helped him through his dark days. Likewise, Chrisley also claimed that he is a fortunate man to call Nelson his significant other.

Kyle Chrisley and his Net Worth

As of 2022, Kyle Chrisley’s net worth is $4 million. Kyle’s fame began when he appeared on his father’s reality TV show. In addition, he and his ex formed a music duo called Lexy & Kyle Chrisley.

The duo released their first single in September 2018, titled Shame On You. They also released a few more singles titled Outta Here and Country Baby. However, Kyle’s music career was not very successful.

Daniel Maslany, Is he married? Net Worth and Bio

Chrisley also had a drug addiction problem in his early adult years. However, the actor is clean now and stays away from substance abuse. In addition, the star seems to invest his money in undisclosed stocks and is growing his wealth.

Kyle, along with his wife and kids, leads a comfortable life. Although Chrisley and his family share a massive fortune, the reality star keeps his assets hidden from the world. The details about Kyle’s cars and houses remain a mystery.

Kyle Chrisley is active on Instagram and Twitter. In addition, he also has a Facebook page. However, only Chrisley’s Instagram is verified. However, Chrisley hasn’t been active on his social media accounts for some time.

The reality star has 96.3k followers on Instagram. Furthermore, he has around 500 followers on Twitter. Kyle has more than 3,000 followers on his Facebook page. Chrisley does not post much on social media. The few pictures that he shares are of his family. Besides, he posts several photos of his daughter.

Kyle’s wife Ashleigh also started gaining a decent number of followers on Instagram. Likewise, Nelson currently holds over 9k followers on her IG account. But, the celebrity wife isn’t as active on social media. But, like her husband’s Insta, Ashleigh’s IG profile is also verified.

For more bios and another fun topic, please visit our site, E-Celebrityfact!