Folk Icon Joan Baez’s Tireless Effort On Activism: Partnered with the Innocence Project for Her Tour 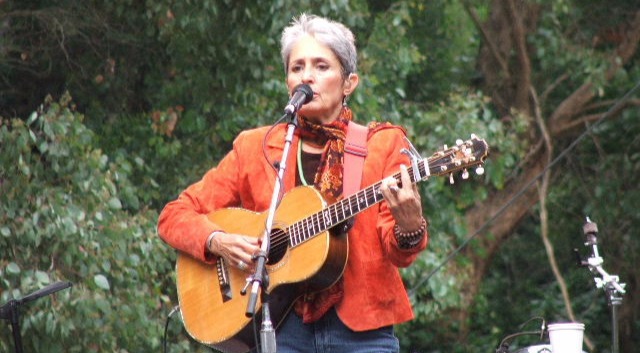 The world recognizes Joan Baez as the singer, who sings the songs of social justice and peace. Professionally, Joan Baez is an American folk singer, musician, songwriter, and activist.

The folk icon, 75, encourages anyone to write songs of social justice, commentary or protest to pair with modern movements with human & civil rights. However, according to the singer, who performed at the 1969’s Woodstock festival, making a definitive anthem for Black Lives Matter or Occupy Wall Street is a tall order.

She relies on time-tested tunes like John Lennon’s “Imagine” when performing concerts in the 57th year of her singing career. Baez said in an interview, “You can’t write an ‘Imagine’. A lot of good stuff comes out, but ‘Imagine’ and ‘Blowin' in the Wind’ kind of knock it all out of the water.” “I think people should keep trying. You have to kee trying because that’s lacking right now”, she added.

The activist and singer share an iconic history with Bob Dylan, songwriter of 1962’s 'Blowin’ in the Wind'. Baez & Dylan, the power couple in folk music during the mid-1960s, their remembrance can be done with the 1975’s 'Diamond and Dust', Baez’s self-penned hit.

Currently, Baez’s live repertoire includes versions of Dylan’s 'Seven Curses' and 'It’s All Over Now'. Looking back at the decade defined by Dylan’s rise & the Beatles as well as cultural turmoil tied to the civil-rights efforts in South and Vietnam War, she refers to the 1960s as a rare union of social action and music talent.

She stated, “I think that’s a 10-year period that just won’t happen again.”

In the 1960s, Baez made frequent appearances along with Martin Luther King Jr. and did multiple stints for anti-Vietnam draft protests in jail. Raised in New York and later in California in a Quaker household, she started refusing salute the US flag at the age of 15. She said, “A Quaker really feels that human lives are more important than flags and turf.”

The singer recalled touring high schools to share her activist beliefs and nonviolence. Baez is partnering with Innocence Project to raise awareness about the Americans, who’ve been wrongly condemned of crimes.
She’s in a joint venture with the Innocence Project for her current tour, as an ambassador for the tireless work combatting wrongful convictions.

“The Innocence Project works for me because it’s all nonviolent action”, said Baez. “It’s absolutely appropriate at this moment. It’s about mass arrests. It’s about racial inequality. It’s about torture.”

The music icon, who began her career amid countercultural & civil rights activism in the '60s told earlier this month, “My feet are tired from all this marching, but I won’t stop.”