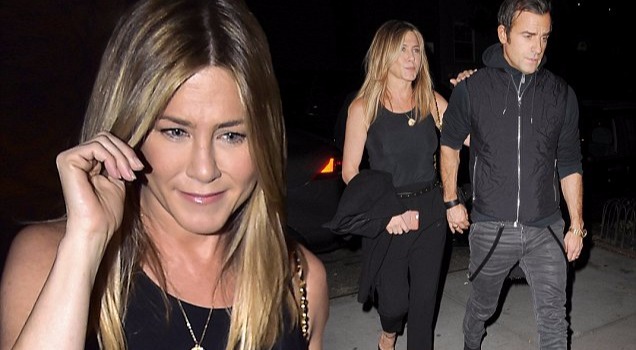 Jennifer Aniston appeared to be unfazed by the Brangelina’s divorce dramas, as she was seen enjoying a night out with husband Justin Theroux on Saturday at The Smile restaurant in Manhattan’s NoHo neighborhood.

Aniston, 45, and her spouse Justin Theroux, who is also 45, were spotted holding hands while Brad Pitt and Angelina Jolie are separating.

This relaxing and romantic evening for Aniston comes after five days Jolie filed for divorce from Brad Pitt, Aniston’s former husband of five years. Married in 2000, Aniston and Pitt split in January 2005 and called it off with an official divorce in October same year.

The Cake star looked happy as she was dressed up in a black tank top, black pants & ankle-strap heels. Meanwhile, Theroux was in a dark blue vest over a Prussian blue hoodie, gray jeans, and gray boots.

On Thursday, the press reported that the Friends alumna was escaping to New York from Los Angeles amid the Brangelina rupture news.
A source reported, “She’s being hounded so much that she’s leaving town.”

Aniston was joined by her husband after closing the HBO program The Leftovers, which was filming the 3rd and final series in Melbourne.

Throughout the years, Jolie and Pitt have admitted to falling for each other. The news of their 12-years of a marriage falling apart went public on Tuesday. Aniston’s reaction to their divorce drama was: “That’s karma for you!” – According to an insider.

Neither Theroux nor Aniston has commented publicly about the brutal divorce which involved Pitt’s alleged infidelity with Marion Cotillard, his Allied co-star & an FBI investigation following his alleged child abuse reports.

After her divorce from the World War Z star and before alighting down on Theroux, Jennifer had relationships with famous men including Vince Vaughn and John Mayer. She ultimately found her heart in Theroux.

Aniston and her current husband, both of them struggling with the hardships in their personal life with a chain of unsuccessful relationships began dating in May 2011. Three years after having the rings exchanged, the couple walked down the aisle last August.