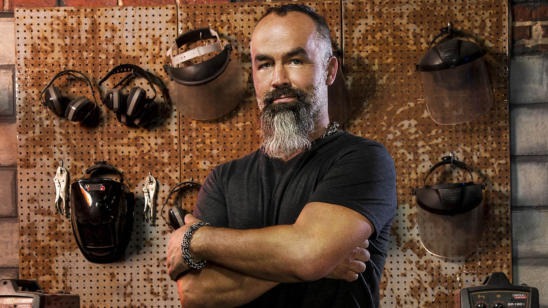 Jason Knight is well-recognized as the ABS Master Bladesmith in the American Bladesmith Society. He appeared as one of the judges in season 3 of History’s series, Forged in Fire. Moreover, he managed to find massive success from the reality TV Show.

Besides his appearance, Jason is also an educator to the next generation’s smith in colleges and schools. However, Knight likes to keep his personal life away from the spotlight. But here’s what we found about Jason down below.

Jason Knight was passionate about the forge from a young age. His father used to read him a story of giants and dragons. As a kid, he started believing in its existence, which encouraged him to make wooden knives and swords. Soon, he created one of the actual knives while studying at high school.

In the 90s, Bladesmithing was not considered a respectable profession in society. It discouraged Jason from pursuing his career in forging, and he was on the verge of giving up. However, his grandmother encouraged him to follow his passion. She sent him to the American Bladesmith society in 2001 to learn how to forge, paying the fees for his classes.

Will Willis bio: Details on his Net worth and married life

His passion for forging took him to the show in California, where he won an award for a best new maker. After achieving an award, he got popular not only among collectors but also with makers.

Jason Knight talked about his Passion

His statement can also prove his passion, “Bladesmithing is my passion, so I have an idea of imaging something, see that image, but that image down on paper, turning that something that I could put in your hand and you can see, this came right out of my mind.”

After graduating, he became an educator to the next frontline of smiths in the art and science of blade-making at colleges and schools. However, he came to the limelight after appearing as a judge in the show Forged in Fire. While James Neilson took a long break from the screen to have surgery on his hand, Jason took his seat. He continued the show until the end of the third season.

After recovering a surgery, James returned in the fourth season’s premiere and continued his role as the judge. Though Jason’s appearance in the show was short-lived, he made a huge fan base through it.

The net worth of Doug Marcaida: Know more about him!

As an accomplished knife maker in the country, he was honored with the coveted B.R. Hughes Award for Best Blade by a Mastersmith.

He crafts his signature knives with the most exquisite materials and meticulous techniques. Moreover, his work is sought by hunters, collectors, and soldiers worldwide. He does his works in the pond-side forge in Harleyville, South Carolina. Previously, he used to work at Beidler Forest Audubon Center and Sanctuary. But now, he is ABS Master Bladesmith in Knight Knives.

Net Worth and Married Life of Jason Knight

Though he was new to the show Forged in Fire, he has experience of 15 years in the field of bladesmithing. He is also a part of the education field where he teaches next frontline smiths. As of now, he has not publicly revealed his net worth but seeing him work for such a long time can be estimated in millions.

Apart from the TV Show and educator, Jason is a husband and a father. He is married to Shelly Knight. Although Jason updated his relationship status on Facebook to married, he has not disclosed anything more than that.

David Baker is in a relationship or not? Find Out

Knight is reasonably active on social media platforms. He regularly shares pictures of his Knives and works. As of April 2018, he has 41K followers on Instagram and has made a huge fan base on Facebook and Twitter.

Know about other Judges of Forged in Fire show!