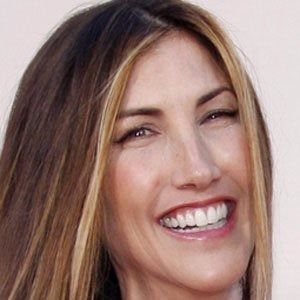 Jackie Sandler, originally known as Jacqueline Samantha Titone, is an actress by profession who is recognized for her role in the popular animated movies Hotel Transylvania. Jackie is actually more famous because of her marriage with the popular comedian and an actor Adam Sandler. Jackie has been married to Adam for almost 13 years now. Jackie Sandler has also appeared in a number of films such as 50 First Dates and Grown Ups.

Jackie Sandler is an American-born lady who spent most her childhood in the coasts of the tourist city of the United States, Florida. Jackie went to a local school in Florida. Her parents moved to California where Jackie found her way to the Hollywood, television and the heart of Adam Sandler.

Primarily, Jackie wanted to pursue her career in the field of modeling. She did very well in the modeling whereby she got numerous opportune moments to represent the posh fashion brands. However, her audiences thought she deserved more than the ramp of the fashion show. In 1999, Rob Schnieder introduced Jackie into the world of Hollywood. She debuted in the role of Sally for the movie Deuce Bigalow: Male Gigolo.

Jackie was quickly recognized by people in the film industry. In the same year 1999, Jackie landed in the comedy creation Big Daddy. In 2000, Sandler did her movie Little Nicky alongside the famous actors such as Adam Sandler and Quentin Tarantino. This gave her a great chance to get acquainted into the faces of the film world. Also, this event led to an affair between Adam and Jackie which would later turn into a lifetime marriage.

Born on September 24, 1974, Jackie Sandler has a very charming character. That’s why the comedy legend Adam Sandler fell in love with her. The couple married in 2003.

Now, the couple has two children: Sadie Madison Sandler and Sunny Madeline Sandler. Adam and Jackie love each other very much. They haven’t thought of divorcing yet.

At the moment, Jackie is in a pause mode from the hectic life of Hollywood and television shooting. She is more into taking care of her children and maintain her beautiful body. Adam has also been supportive of her wife’s wise decision.