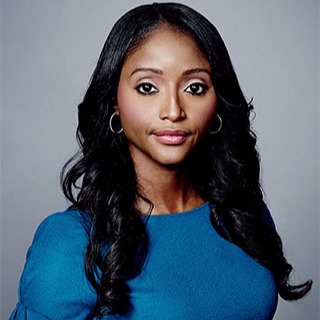 Journalist Isha Sesay holds recognition as a reporter. Moreover, she excelled in the broadcasting field. Likewise, she worked at CNN for over a decade.

Sesay later gained more fame for her work experience as a news anchor. And Isha worked correspondent at CNN International from 2005 to 2018.

Bio and Age of Isha Sesay

Moreover, Sesay was born to Temne parents. Her mother, Dr. Kadi Sesay, was a former lecturer, and her father, who died in 1988, was a legal advisor. And later, after turning seven, Isha and her family moved back to their ancestral homeland. Besidesm, she grew up with two siblings.

Talking about her education, Isha studied at the Fourah Bay College School in Freetown. In 1992, she returned to the United Kingdom to continue her further studies.

Sesay completed A-levels with an English degree. After that, she was accepted to Trinity College, Cambridge. Initially, she wanted to become an actress but later changed her decision to pursue a career as a TV journalist.

Isha Sesay started off her career as unpaid intern for BBC

Following graduation, Isha Sesay paved the way to her dream job by starting to work as an unpaid intern for the BBC talk show Kilroy. She later earned a paid full-time job in BBC.

With a few projects behind the camera, her first job came as a TV announcer on BBC Choice, where she presented numerous programs for CNN, BBC, and TWI.

In 2002, she joined the British telecommunications company Sky. After serving a few years there, she later joined independent television news ITN where she presented popular shows like the Early Morning News program and the UK’s famous ‘GMTV.’

In 2005, Isha started a new journey as an anchor and correspondent for CNN International. However, her salary remains a mystery. Besides, it is assumed that her net worth is relatively high.

Before joining CNN, she presented the famous show called ‘Good Morning Sports Fan’ for Star Sports. She explained the show for three years, from 1998 to 2001.

Isha also became famous as a show presenter called 60 Bulletins on Anderson Cooper 360°. In 2012, she joined HLN as a co-anchor of Evening Express.

The famous British journalist of Sierra Leonean descent, Isha, has covered much breaking news in her career. While working for HLN, she covered major news like the death story of the former South African president Nelson Mandela, the United Nation’s General Assembly in 2012, the royal wedding life from London, 2011 protests in Egypt, the disputed Zimbabwe’s election in 2008, the assassination of Benazir Bhutto and others.

Likewise, she has also interviewed famous people like the Nigerian president, David Beckham, Bill Gates, Akon, Matt Damon, Hugh Jackman, etc. Sesay has been nominated for various awards many times in her career.

The prominent journalist grabbed the News and Documentary Emmy Awards twice in the same year for covering the amazing story ‘Syria: Underground Doctors’ and live coverage of the Libya revolution. She has climbed up the corporate ladder in such a short time.

The famous news presenter Isha Sesay married her long-term boyfriend, Leif Coorlim, in 2013. Sesay and her spouse, Leif, tied the knot in an intimate setting. What’s more, her husband, Coorlim, is an executive director of the CNN Freedom Project.

Their love story started after they met at the CNN office. They have been dating since 2011. The couple used to spend their days quite happily. However, things didn’t pan out for the former lovebirds.

Currently, Sesay and her ex-husband Coorlim have split. Likewise, the former couple finalized their divorce in secrecy. And so, it remains unclear when Leif and Isha broke up.

The beauty with the dark hair, Isha Sesay, has a standard height that complements her long thin legs. She can keep her viewers glued to their seats. The talented journalist stands at five feet and four inches.

The famous reporter is an active user of her Twitter and frequently interacts with her fans through social media sites. Her updated and detailed biography is available on Wikipedia and the official CNN website.