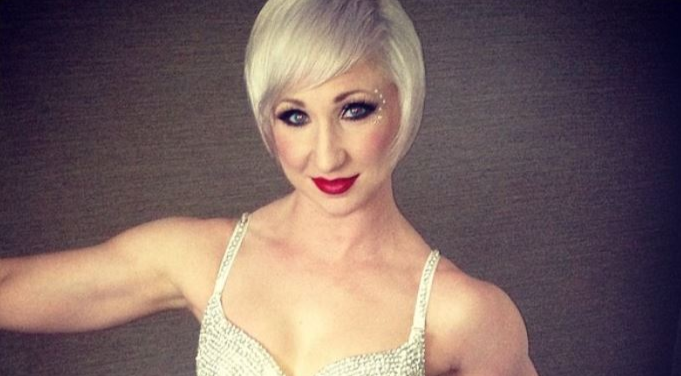 Described by Theatermania as an artist who is “worth the price of admission alone,” Marcy Richardson is anything but your regular actress. Apart from being an opera singer, acrobat, pole dancer, and burlesque performer, she is primarily known for her singing skills while performing aerial acrobats and pole routines.

She also showcased her pole dancing skills in the new 2019 movie, Hustlers alongside Jennifer Lopez, Lilly Reinhart, and Cardi B. To know more about Marcy’s personal life, career and achievements, keep reading!

Marcy Richardson was born in 1980 to Dr. Harrison H. Richardson and Martha W. Barrette in Grosse Pointe, Michigan. Her father worked as an emergency medicine specialist in Newport News, whereas her mother was an electrical engineer for DTE Energy in Detroit.

Speaking about her childhood, she always had a keen interest in singing and dancing. At the age of 5, she joined ballet class but was also active in sports. She started taking voice lessons at the age of 15. Despite wanting to become the next Madonna, her voice teacher told her that she was a classical soprano.

She never tried singing at a high range as she had never listened to musical theatre or opera while growing up. But thanks to her coach, she was able to sing Handel Baroque music in just a few weeks. Pursuing what she loves, Marcy completed her Bachelor’s as well as a Masters’s degree in Opera from Indiana Jacobs School of Music.

Early Career Life: How it all Began

After getting her bachelor’s degree, Marcy wanted to follow the traditional opera career path. She earned her training from a few opera companies. She began performing in operas like Central City Opera, Baltimore Opera, Orlando Opera, and the Brevard Music Center for minor roles.

In 2008, half of the companies that she worked with had gone skint, which made her look for any job that she could find. She started taking pole-dancing lessons for fun in New York two years later.

Shortly after taking a few classes, she got a pole for her apartment. Then in a few years, just for having fun, she started taking part in pole fitness competitions, which later led to becoming a part of her performing career.

After becoming familiar with pole dancing, Marcy was approached by people asking her to sing while doing acrobats. At first, she thought the idea lame. But soon, she experimented with singing while in a hoop at the Duane Park.

She performed her first aerial gig at the Brooklyn Warehouse, where she sang an Italian soprano, Lascia ch’io Pianga. Following that, she sang on a pole for the first time for Madonna while doing her Rebel Heart Tour. Marcy was told to perform one of Madonna’s songs, Holy Water, on the pole for an audition.

In 2012, Marcy performed in an opera choreographed by Austin McCormick, composed by Jonathan Dawe called Così Faran Tutti. A few years later, Austin was in search of a soprano, and Marcy came to be the perfect fit.

Three years later, she debuted as the evil stepsisters in Cinderella in Company XIV. Since then, she has become a company fixture. She has performed numerous roles, including Champagne in the holiday extravaganza Nutcracker Rouge, Marta in Caldara’s Maddalena, Athena in PARIS, and others.

Marcy currently portrays the role of Mad Hatter in the company’s current production, Queen of Hearts. Moreover, fans also remember Richardson’s show-stopping performances in Tears for Fears’ Mad World. Besides that, she performs regularly in the Bartschland Follies at the Mckittrick Hotel in New York and the Operatic Tease at Duane Park.

Marcy won the 2018 Dora Mavor Moore Award for Best Female Performance in opera for her role in Orfeo ed Euridice composed by Christoph Willibald Gluck. As of 2019, she is busy rehearsing for her 5th production in Nutcracker Rogue with Company XIV, which is said to open on November 14, 2019.

Marcy Richardson as Star in Hustlers

Marcy starred in the 2019 drama thriller movie Hustler alongside several notable personalities, including Jennifer Lopez, Lilly Reinhart, Constance Wu, and Cardi B. The movie is based on the 2015 New York magazine article, The Hustlers at Scores by Jessica Pressler.

The burlesque queen did not have any problem while starring in the movie as she played the role of a stripper. It is where her pole dancing talents came into play. On September 7, 2019, the movie premiered at the Toronto International Film Festival and later grossed $136 million worldwide.

Richardson appeared in several movies throughout the years. Moreover, it includes the 2014 fantasy adventure, Into the Woods and The Angels City 4 from The City of Angels.

On November 8, 2014, Marcy and Scott married at Landmark on the Park in New York. Marcy’s aunt, Jean Richardson, also a Presbyterian, had officiated the marriage.

The OperaGaga has a pretty public Social Media profile. She regularly posts pictures of her pole dancing and performances on Instagram. She also has her website, where she sells various collections of featured merchandise. The net worth of the 39 years old singing aerialist has yet to be calculated.