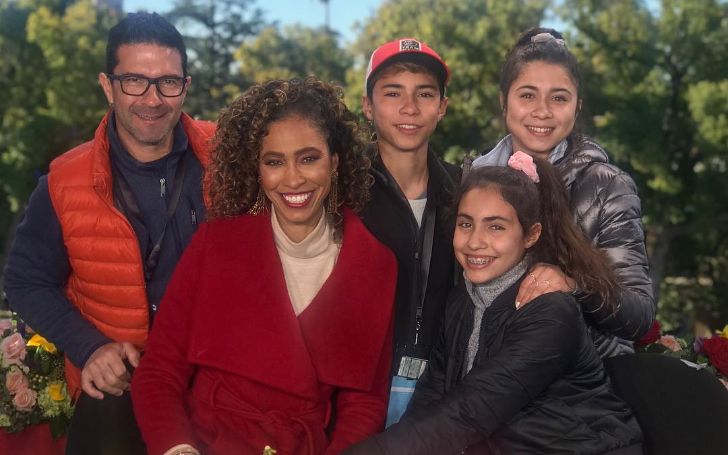 Because of her inter-racial relationship, Steele had one embarrassing moment in her life when she went outing with her baby. Two middle-aged women approached her and asked if she was the nanny! Steele remembered it was in June 2002 when those words turned her speechless and teary-eyed.

Furthermore, Sage has also dealt with this kind of discrimination in her early career. She knows all the hatred she has received in her twenty-one years. Nevertheless, she always kept faith in herself, and now she is at the top of the broadcasting world.

Haters will hate, but Sage Steele has always been supported by her spouse and kids.

Since Jonathan is a home-stay-dad, Sage Steele feels it easier to handle her personal and professional life. Jonathan stays at home and looks after the kids.

Besides those few embarrassing moments, the host of NBA Countdown on ESPN and ABC, Steele, is getting good company from her husband, Jonathan, and, side by side, her three lovely kids.

No matter how hard the situation was, her family was always there by her side to motivate her. Her former trainer husband, Jonathan, has also been a great help to her in raising her three kids.

Sage Steele married Jonathan Bailey in 1999. They have a family of five, including their three kids. Sage, a host of ESPN’s NBA Countdown, has two daughters, Quinn and Evan, and also a son, Nicholas.

After every night, there’s a bright morning.

She has earned fame for being the co-host of Sports Center, ESPN’s flagship show. She was employed at ESPN at the beginning of 2007. At first, she worked on the ET version of Sports Center.

She has tied a knot with a guy who doesn’t belong to her race. Sage Steele’s husband is white, whereas Steele is half white. And all of her three children have got very light complexions. After six years of being in a relationship, Sage and Jonathan decided to marry.

They have been married since 1999. Steele gave birth to their three wonderful children and has made her own sweet family.