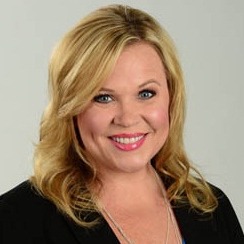 Holly Rowe is a sports telecaster, currently working for ESPN. This versatile and talented American lady got her feet wet as a sideline reporter on several telecasts with ABC Sports during the mid-1990s and became the fixture with ESPN in the late 90s. Making her start as a sports reporter & anchor for the numerous TV and radio stations, she later made a name for herself through ESPN.

Holly Rowe was born on June 16, 1966, in the United States. Confidential by nature, Rowe has revealed no details of her early life, how and where she grew up, her siblings. Even her parents’ identities are not known yet.

Holly Rowe’s ambition led her to what she is now, an integral part of ESPN

Ambitious and strong determined, Rowe might have developed an interest in sports and journalism at an early age which led her to pursue a degree at University of Utah majoring in the broadcast journalism. She began garnering experiences of journalism landing a job of news anchor for her college television station.

After completing a degree in 1991, she entered CBS Sports as an intern and remained there for a year. Before establishing a major sports reporting career, she was employed as a sportswriter for Daily Utah Chronicle & David County Clipper.

Holly is currently a full-time ESPN sports reporter. She has been a full-time college football sideline reporter since 1998, that was when she entered ESPN. Her capacity of working full-time for ESPN helped her to be a part of the numerous regular season games & post-season bowls.

Prior to starting as a college football sideline reporter for ESPN, she worked for a year with ABC Sports. Being associated with local stations was plus point for her as she could collect experiences to show her expertise in the major sports television network.

With ESPN, she’s been a part of broadcasting women’s college volleyball and college basketball. She has been part of Women’s World Cup matches, coverage of Running of the bulls and coverage of swimming. Additionally, she is known for the coverage of tracks & field events. Being one of the few women in sports broadcasting industry, she has been profiled by other news organizations and media.

Before ESPN, Rowe had worked with several broadcast organizations. Since 1993, Fox Sports have seen this versatile lady as the broadcaster of Women’s college basketball. The Blue & White Sports Network, a Utah-based network that syndicated various Western Athletic Conference sporting events still employs the Rowe in their broadcasts since 1993.

Holly Rowe’s professional life graph is well illustrated by several media, but still, her personal life is almost a mystery. Though she is handling an on-camera profession since the 90s, she has managed to keep her private life out of the prying eyes. Despite reaching the age bar of 50, she seems single. Perhaps, she hasn’t shown interest to any man throughout her life.

Age seems just a number for this sportscaster, as no one can imagine her real age seeing her elegant personality in the sexy wardrobe pieces, she mostly prefers. Dressed with the tight fitting and knee length skirts, she sports her sexy legs, which leaves many men jaw-dropped.

Holly Rowe, who’s diagnosed with cancer in early months of 2016, finally got a tumor from her chest removed in August. Her worthy contribution provided her the support of the entire world. Unexpected support from her fans helped her get recovered very fast.

Though her private life hasn’t been captured by any media yet, her successful career is known to the world. Fans can always know updates in her professional life through social medias. On her official twitter account, she has over 60k fans following.